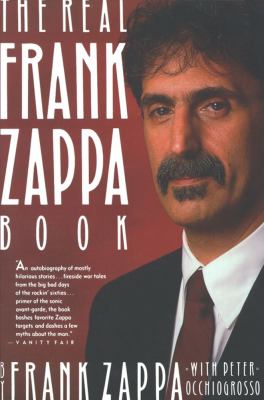 CHAPTER 1 How Weird Am I, Anyway? "I never set out to be weird. It was always other people who called me weird."Frank Zappa(Baltimore Sun,October 12, 1986) This book exists on the premise that somebody, somewhere, is interested inwho I am, how I got that way, and what the fuck I'm talking about.To answer Imaginary Question Number One, let me begin by explainingWHO I AM NOT.Here are two popular'Frank Zappa Legends'...Because I recorded a song called "Son of Mr. Green Genes" on theHot Ratsalbum in 1969, people have believed for years that the character with that name on theCaptain KangarooTV show (played byLumpy Brannum)was my 'real' Dad. No, he was not.The other fantasy is that I once'took a shit on stage.'This has been propounded with many variations, including (but not limited to):[1]Iateshit on stage.[2]I had a 'gross-out contest' (what the fuck is a'gross-out contest'?)withCaptain Beefheartand webothate shit on stage.[3]I had a 'gross-out contest' withAlice Cooperand hestepped on baby chickensandthenI ate shit on stage, etc.I was in a London club called the Speak Easy in 1967 or '68. A member of a group called the Flock, recording for Columbia at the time, came over to me and said: "You're fantastic. When I heard about you eating that shit on stage, I thought, 'That guy isway, way out there.'" I said,"I never ate shit on stage."He looked really depressed -- like I had just broken his heart.For the records, folks:I never took a shit on stage, and the closest I ever came to eating shitanywherewas at a Holiday Inn buffet in Fayetteville, North Carolina, in 1973.More Important Information for People Who Wonder What I EatI wasn't crazy about most of the food my mother made -- likepasta with lentils.That was one of the most hated dishes of my childhood. She would make enough to last a week, in a big pot. After a few days in the icebox it used to turn black.Myfavoritethings to eat then were blueberry pie, fried oysters and fried eels -- but I also used to lovecorn sandwiches:white bread and mashed potatoes with canned corn dumped on it. (Every once in a while, we'll come back to this fascinating topic, since it seems to matter so much to certain people in the audience.)The Boring, Basic Stuff "Be regular and orderly in your life so that you may be violent and original in your work."Gustave Flaubert How 'bout that epigraph, huh? Peter, you're cracking me up already. Okay, here we go....My real name isFrankVincent Zappa (notFrancis-- I'll explain it later). I was born on December 21, 1940, in Baltimore, Maryland. When I popped out, I was all black -- they thought I was dead. I'm okay now.My ancestry is Sicilian, Greek, Arab and French. My mother's mother was French and Sicilian, and her Dad was Italian (from Naples). She wasfirst generation.The Greek-Arab side is from my Dad. He was born in a Sicilian village called Partinico, and came over on one of the immigrant boats when he was a kid.He used to work in his Dad's barbershop on the Maryland waterfront. For a penny a day (or a penny a week -- I can't remember), he would stand on a box and lather the sailors' faces so his Dad could shave them.Nice job.Eventually he went to college at Chapel Hill, in North Carolina, and played guitar in some sort of'strolling crooner'trio. (I still get birthday cards from the insurance company owned by Jack Wardlaw, the banjo player.)They used to go from dormitory window to dormitory window, serenading coeds with songs like "Little Red Wing." He was on the wrestling team and, when he graduated, he took a job teaching history at LoyolaZappa, Frank is the author of 'Real Frank Zappa Book', published 1990 under ISBN 9780671705725 and ISBN 0671705725.