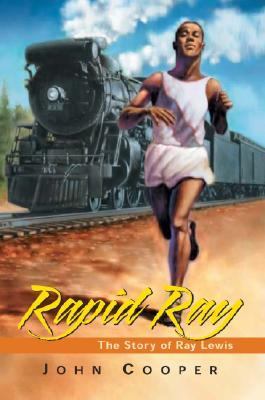 Chapter 1: My Early Years My name is Raymond Gray Lewis. Most people just call me Ray. But there was a time when just about the only name I was known by was Rapid Ray, in my hometown of Hamilton, Ontario, and across Canada. Why was I called Rapid Ray? Because I could outrun just about any other opponent when I was young. Of course, I was called a lot of other names too, mostly because of my skin color. Being a Canadian of African descent, I grew up during a time, in the early part of the 20th century, when being black meant that you were treated differently than people with light skin. It was a time of terrible discrimination. You had to struggle. You might have to fight hard for a job. You could expect to be turned down for a loan from a bank if you were trying to buy a house. In school, you were likely to be teased or called names by your classmates and the white teachers might treat you poorly all because of the color of your skin. Even just buying a loaf of bread at the grocery store, getting a table in a restaurant, or trying to sit in the front section of a movie theater could be difficult. Black people in Canada and the United States, the descendants of slaves brought to work on farms and plantations, had to fight for respect every day of their lives. As the great-grandson of former slaves, it was no different for me. I had to put up with all kinds of name calling, by other kids and later by adults, whether I was running to school, racing around the block, or competing in track-and-field meets across the country. But you can believe me when I tell you that being treated poorly by others didn't defeat me. It only made me want to run harder, to prove to everyone that I could achieve great things. I ran so hard, in fact, that I went all the way to the Olympic Games in Los Angeles, California, and to the British Empire Games in London, England, where I even sat down to dinner with royalty. While I was training as an athlete for the Olympics, I worked hard, too, as a railway porter on the Canadian Pacific Railway, serving people who were traveling across Canada and into the United States. I was born in Hamilton, on Clyde Street, on October 8, 1910. Hamilton is known as Canada's Steel Town, and it produces much of the steel used in manufacturing things we use every day, from cars and stoves to refrigerators, tools, and machinery. It was and still is a very busy city. I grew up watching cargo carriers steam into the harbor with raw iron ore; people bustled about the streets to and from work, and horses pulled wagons that carried milk, eggs, and bread to customers throughout the city. I was the youngest child of Cornelius and Emma Lewis. My eldest brother was Victor, followed by my sister Marjorie, then my brother Howard, and finally me. My parents taught me the value of working hard. That meant working hard in school and, when I became an athlete, training hard too. I attended Wentworth Street Public School. I used to get up in the morning, have my breakfast, and, while I didn't dawdle too much, sometimes I had to run hard to get to school before the bell at nine o'clock a.m. Lucky for me, the school was only about a block and a half away. I'm pleased to say that I was never late to school, not even one day, even though I had to run hard to get there at times. It was a big public school for the time two storeys high, with several hundred students and more than twelve rooms. Many years after I attended it, Wentworth Public School was closed and later torn down to make way for an apartment building. Growing up on Clyde Street was fun. The younger I was, the less fuss white people made about the color of my skin. My friends and I used to play hockey on the streets and, where buses, cars, and trucks now drive through Hamilton'Cooper, John is the author of 'Rapid Ray The Story of Ray Lewis' with ISBN 9780887766121 and ISBN 0887766129.