Purgatory From the Divine Comedy 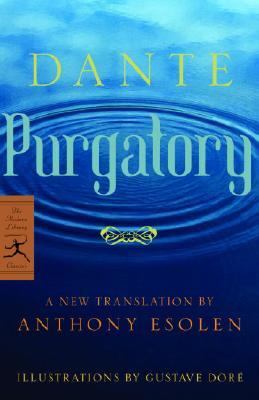 FOREWORD If a poem is not forgotten as soon as the circumstances of its origin, it begins at once to evolve an existence of its own, in minds and lives, and then even in words, that its singular maker could never have imagined. The poem that survives the receding particulars of a given age and place soon becomes a shifting kaleidoscope of perceptions, each of them in turn provisional and subject to time and change, and increasingly foreign to those horizons of human history that fostered the original images and references. Over the years of trying to approach Dante through the words he left and some of those written about him, I have come to wonder what his very name means now, and to whom. Toward the end of thePurgatorio, in which the journey repeatedly brings the pilgrim to reunions with poets, memories and projections of poets, the recurring names of poets, Beatrice, at a moment of unfathomable loss and exposure, calls the poem's narrator and protagonist by name, "Dante," and the utterance of it is unaccountably startling and humbling. Even though it is spoken by that Beatrice who has been the sense and magnet of the whole poem and, as he has come to imagine it, of his life, and though it is heard at the top of the mountain of Purgatory, with the terrible journey done and the prospect of eternal joy ahead, the sound of his name at that moment is not at all reassuring. Would it ever be? And who would it reassure? There was, and there is, first of all, Dante the narrator. And there was Dante the man living and suffering in time, and at once we can see that there is a distinction, a division, between them. And then there was, and there is, Dante the representation of Everyman, of a brief period in the history of Italy and of Florence, of a philosophical position, a political allegiance -- the list is indeterminate. Sometimes he seems to be all of them at once, and sometimes particular aspects occupy the foreground. The commentaries date back into his own lifetime -- indeed, he begins them himself, with theVita Nuova-- and the exegetes recognized from the beginning, whether they approved or not, the importance of the poem, the work, the vision, as they tried to arrive at some fixed significance in those words, in a later time when the words themselves were not quite the same. Any reader of Dante now is in debt to generations of scholars working for centuries to illuminate the unknown by means of the known. Any translator shares that enormous debt. A translation, on the other hand, is seldom likely to be of much interest to scholars, who presumably sustain themselves directly upon the inexhaustible original. A translation is made for the general reader of its own time and language, a person who, it is presumed, cannot read, or is certainly not on familiar terms with, the original, and may scarcely know it except by reputation. It is hazardous to generalize even about the general reader, who is nobody in particular and is encountered only as an exception. But my impression is that most readers at present whose first language is English probably think of Dante as the author of one work,The Divine Comedy, of a date vaguely medieval, its subject a journey through Hell. The whole poem, for many, has come to be known by theInfernoalone, the first of the three utterly distinct sections of the work, the first of the three states of the psyche that Dante set himself to explore and portray. There are surely many reasons for this predilection, if that is the word, for theInferno. Some of them must come from the human sensibility's immediate recognition of perennial aspects of its own nature. In the language of modern psychology theInfernoportrays the locked, unalterable ego, form after form of it, the self and its despair forever inseparable. The terrors and pain, the absence of any hope, are the ground of the drama of tDante Alighieri is the author of 'Purgatory From the Divine Comedy', published 2004 under ISBN 9780812971255 and ISBN 0812971256.