Pudd'Nhead Wilson And, Those Extraordinary Twins 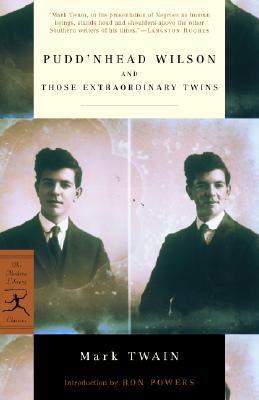 Chapter 1 Tell the truth or trump-but get the trick. Pudd'nhead Wilson's Calendar The scene of this chronicle is the town of Dawson's Landing, on the Missouri side of the Mississippi, half a day's journey, per steamboat, below St. Louis. In 1830 it was a snug little collection of modest one- and two-story frame dwellings whose whitewashed exteriors were almost concealed from sight by climbing tangles of rose-vines, honeysuckles and morning-glories. Each of these pretty homes had a garden in front fenced with white palings and opulently stocked with hollyhocks, marigolds, touch-me-nots, prince's-feathers and other old-fashioned flowers; while on the window-sills of the houses stood wooden boxes containing moss-rose plants and terra-cotta pots in which grew a breed of geranium whose spread of intensely red blossoms accented the prevailing pink tint of the rose-clad house-front like an explosion of flame. When there was room on the ledge outside of the pots and boxes for a cat, the cat was there-in sunny weather-stretched at full length, asleep and blissful, with her furry belly to the sun and a paw curved over her nose. Then that house was complete, and its contentment and peace were made manifest to the world by this symbol, whose testimony is infallible. A home without a cat-and a well-fed, well-petted and properly revered cat-may be a perfect home, perhaps, but how can it prove title? All along the streets, on both sides, at the outer edge of the brick sidewalks, stood locust-trees with trunks protected by wooden boxing, and these furnished shade for summer and a sweet fragrance in spring when the clusters of buds came forth. The main street, one block back from the river, and running parallel with it, was the sole business street. It was six blocks long, and in each block two or three brick stores three stories high towered above interjected bunches of little frame shops. Swinging signs creaked in the wind, the street's whole length. The candy-striped pole which indicates nobility proud and ancient along the palace-bordered canals of Venice, indicated merely the humble barbershop along the main street of Dawson's Landing. On a chief corner stood a lofty unpainted pole wreathed from top to bottom with tin pots and pans and cups, the chief tinmonger's noisy notice to the world (when the wind blew) that his shop was on hand for business at that corner. The hamlet's front was washed by the clear waters of the great river; its body stretched itself rearward up a gentle incline; its most rearward border fringed itself out and scattered its houses about the base-line of the hills; the hills rose high, inclosing the town in a half-moon curve, clothed with forests from foot to summit. Steamboats passed up and down every hour or so. Those belonging to the little Cairo line and the little Memphis line always stopped; the big Orleans liners stopped for hails only, or to land passengers or freight; and this was the case also with the great flotilla of "transients." These latter came out of a dozen rivers-the Illinois, the Missouri, the Upper Mississippi, the Ohio, the Monongahela, the Tennessee, the Red River, the White River, and so on; and were bound every whither and stocked with every imaginable comfort or necessity which the Mississippi's communities could want, from the frosty Falls of St. Anthony down through nine climates to torrid New Orleans. Dawson's Landing was a slaveholding town, with a rich slave-worked grain and pork country back of it. The town was sleepy and comfortable and contented. It was fifty years old, and was growing slowly-very slowly, in fact, but still it was growing. The chief citizen was York Leicester Driscoll, about forty years old, judge of the county court. He was very proud of his old Virginian ancestry, and in his hospitalities and his rather formal and stately manners he kept up its traditions. He was fine and justTwain, Mark is the author of 'Pudd'Nhead Wilson And, Those Extraordinary Twins', published 2002 under ISBN 9780812966220 and ISBN 0812966228.