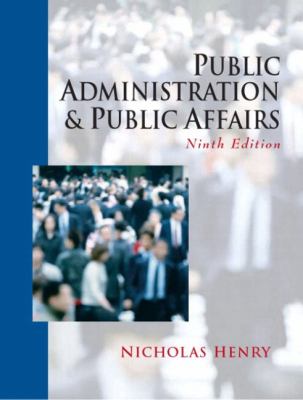 Welcome to the ninth edition ofPublic Administration and Public Affairs. The field and practice of public administration are changing more rapidly, and more radically, than ever before in their history. The horrific events of September 11, 2001, illuminated these changes, and, simultaneously, brought home to Americans a renewed appreciation for the centrality of government. Ironically and paradoxically, just as Americans are beginning to reappreciate their governments, the institution of government itself is devolving, decentralizing, distributing, and discarding its traditional powers as never before. As a consequence, public administrators increasingly find themselves practicing their craft in settings other than government. Public administrators, now more than ever, administer public policy not only from positions in governments, but in organizations that are quite beyond the pale of the public sector. The ninth edition ofPublic Administration and Public Affairsrecognizes this new and, we think, healthy reality. Hence, among the new, seriously revised, or significantly expanded discussions in this edition are, in rough order of appearance, the following: Americans' trust in their governments American presidents' struggles with, or avoidance of, their bureaucracies Globalization's impact on public administration Our new era of governance The possible emergence of governance as a new paradigm of public administration The growing propensity of new public administration graduates to work in institutions other than government The unique characteristics of organizations in the nonprofit sector The powerful place of governing boards, and the differences among boards in the private, public, and nonprofit sectors The unique aspects of decision making in public and nonprofit organizations Bureaucratization and public organizations Red tape and public organizations The organizational environment of the independent sector The techniques of clarifying complex problems of public policy Game theory, decision trees, the critical path method, and cost-benefit analysis The widening impact of the computer on bureaucrats and citizens e-government and its implications for public administrators The connections between performance measurement, public program evaluation, and political corruption The new public management How program evaluators deal with ethical lapses Budgeting for results The new dimensions of the federal revenue surplus The recruitment crisis in the public service The changing complexion of affirmative action policies The evolution of public policy analysis Governments' growing use of policy analysts Strategic planning in the public sector and the independent sector The new context of governance: intersectoral administration The characteristics of the third sector New patterns of federal procurement and privatization Privatization, cost-effectiveness, and competition in delivering public services The proliferating public authorities Three examples of the new intersectoral administration: human services, charter schools, and neighborhood governance The rocketing rise of community development corporations Governments' relations with, and use of, nonprofit organizations Americans' faith in the emerging sector Vouchers, especially their expanding use by the federal government Volunteers in government and federal encouragement of volunteers in other sectors The evolution of intergovernmental relations: layer cakes, marble cakes, pound cakes, and crumble cakes The empowerment of the states in the federal system Types and forms of local government, and their scope, functions, and revenue sources TheHenry, Nicholas is the author of 'Public Administration and Public Affairs', published 2003 under ISBN 9780131401921 and ISBN 0131401920.