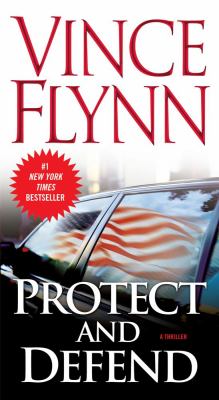 1 Puerto Golfito, Costa Rica Mitch Rapp ran his hand along her smooth, naked thigh, up to her waist, and then down along her flat stomach. His body was pressed against hers; front to back, her head resting on his arm. This moment had not been part of the plan, but it shouldn't have surprised him. There had been signposts; furtive glances, comments made only half in jest. The tension had built for the better part of a year. Each of them silently wondering. Neither knowing for sure if it would ever go to that next level. And then they arrived at the private villa overlooking the tranquil beach. The warm, humid air, the crashing surf, the shots of tequila; all coalesced to create a situation of overwhelming sexual tension. Rapp kissed her bare shoulder, nudged a lock of her silky, black hair with his nose and listened to her breathing. She was sound asleep. He lay still for a long moment, completely intoxicated by the smell and touch of the beautiful woman lying next to him. He hadn't felt this alive in a long time, though guilt was still hovering in the recesses of his conscience, waiting to come rushing back at any moment. He could sense it gnawing at the edge of his psyche. Trying to get back in. Forcing him to think about things he wished he could forget, but knew he never would. Pulling himself away from her, he rolled onto his back and stared up at the ceiling fan. Candles danced with the breeze and threw a faint light on the slow-turning blades and the dark, stained timber rafters above. Beyond the open balcony doors the waves rolled onto the beach. It had been two years since a bomb had destroyed his home on the Chesapeake Bay, killing his wife and the child she was carrying. Not once since that tragic day had he slept soundly, and tonight would be no different. They'd come for him on that fall afternoon -- not her. His guilt over her death drove him to the heights of rage and the valleys of sorrow. He had been a fool to think he could settle down and have a family. There were too many enemies. Too many relatives of the men he had killed. Too many governments and powerful individuals who would like nothing more than to see Mitch Rapp lying facedown in a pool of his own blood. There had been moments -- moments of deep despair where Rapp had quietly wished one of them would succeed. He welcomed the challenge. Just maybe, someone would get lucky and put him out of his misery. The odds of that happening tonight, however, were slim to nonexistent. Contrary to what his current prone position and the woman lying next to him suggested, Rapp had not traveled thousands of miles for a romantic getaway. Simply put, he had journeyed to this tropical location to kill a man. A narcissistic political operative who had selfishly put the needs of his party and himself above those of America. His scheming had changed the course of the last presidential election and resulted in the deaths of dozens of innocent people. With each passing week, it become more obvious that the man thought he had gotten away with it. In fact, only a few people did know of his involvement, but unfortunately for the target, they were not the types to let treason go unpunished. Rapp and his team had kept an eye on the man for the better part of a year. At first the surveillance was extremely passive. He was on one coast, and Rapp and his people were on the other. They tracked him electronically through his credit cards and ATM withdrawals. As the months passed, and the target began to let his guard down, they stepped up the surveillance. Listening devices were placed near his home, office, and boat, and his cell phone calls were monitored. Spyware was installed on his computers and they began tracking his every move, looking for a pattern or an opportunity. That was how they discovered the trip he had planned, a month-long excursion from San Diego down to Panama and back. The target was planning on putting his branFlynn, Vince is the author of 'Protect and Defend' with ISBN 9781416505037 and ISBN 1416505032.