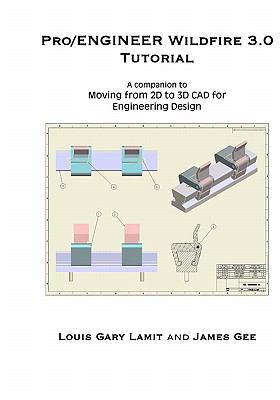 Louis Gary Lamit received a BS degree from Western Michigan University in 1970, and studied for a master's degree at Wayne State University and Michigan State University. He also did graduate work at the University of California at Berkeley, and holds an NC programming certificate from Boeing Aircraft. Mr. Lamit has worked as a drafter, designer, numerical control (NC) programmer, technical illustrator, and engineer in the automotive, aircraft, and piping industries. He started as a drafter in 1966, working in Detroit for the automobile industry, doing tooling, dies, jigs and fixture layout, and detailing at Koltanbar Engineering, Tool Engineering, Time Engineering, and Premier Engineering for Chrysler, Ford, AMC, and Fisher Body. He has also worked at Remington Arms and Pratt & Whitney Aircraft as a designer, and at Boeing Aircraft and Kollmorgan Optics as an NC programmer and aircraft engineer. He has taught at all scholastic levels from secondary school to university. He is currently a full-time instructor and department head in CAD at De Anza College, in Cupertino, California. In addition, Mr. Lamit owns and operates his own consulting firm, Lamit and Associates - CAD-Resources.com, and does trainings and industry consulting. He has authored over two dozen other published works, including several well-respected books on industrial model building, piping drafting and design, descriptive geometry, electronics drafting, technical drawing, engineering graphics and design, CAD software, and other technical topics. More information on the author, his publications, and his courses, are available at the Web site of CAD-Resources (www.cad-resources.com).Gee, Louis Gary Lamit and James is the author of 'Pro/ENGINEER Wildfire 3. 0 Tutorial', published 2007 under ISBN 9781419669149 and ISBN 1419669141.