Productive Narcissist The Promise and Peril of Visionary Leaders 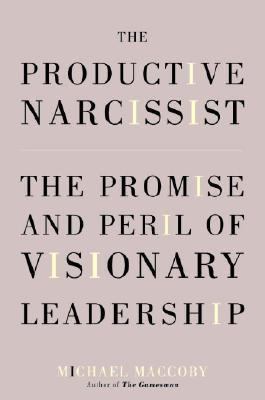 RECOGNIZING PERSONALITY TYPES Let's start out with a question I have asked hundreds of people at work: Can you describe your personality? If you're like most people, you don't have a ready answer. You may cite temperament traits such as "upbeat," "reserved," and "outgoing," or behavioral traits such as "dependable," "caring," and "hardworking." Some people focus on a key part of who they are, like "I play to win" or "I never give up." You may type yourself according to a work role--engineer, designer, manager--or a lifestyle label--parent, spouse, single. Very few people think of themselves as having a personality type that encompasses how they habitually meet the challenges of work and social relationships, the deep-rooted way they resolve the human needs to survive and prosper physically and emotionally, to make life satisfying and meaningful. Imagine that you work in a small, successful technology company. You report to a manager who is known throughout the office as the "numbers guy." He sets the budget for your department, keeps an eye on the bottom line, and runs the office infrastructure. If you have a proposal for a new initiative, you know you won't get anywhere with him unless you've done your financial homework--worked up a spreadsheet or a detailed profit-and-loss report. How do you know this? Because you've seen how he reacts whenever he's approached without the financials in place; he can be rude, dismissive, even blow up at anyone who ignores his need for facts and figures. You and your colleagues like to complain about him, thinking that his obsession with the numbers gets in the way of more creative or spontaneous ideas. Nevertheless, you take his concerns into account whenever he pops into your office to ask a quick question, or when you need something from him, or whenever you're called upon by him to make a snap decision at a staff meeting. There's a pattern to his behavior, a typical, habitual response that you and your colleagues have noticed over time. He's not just playing a role; you think he's expressing his personality. You may even have a name for his behavior, calling him "anal," or a "little picture" person, behind his back. You are already engaged in personality typing; in fact, you use these "typing" skills all the time, without even being aware of them. You may not have a manager or colleague who is exactly like this "numbers man" (although many people do), but surely you have a boss, coworker, or colleague whose behavior you can predict with a degree of accuracy. You have a good idea of what certain people will do in any given situation, how some of your colleagues will react to the stress of a group meeting, the demands of a deadline, or a particularly hard-driving boss. You might say about one of your coworkers, "She would never disagree with our boss," meaning that, in your experience, it's not in her nature; you've never seen her do it, and you can't imagine her acting differently. You notice the little smile of pleasure she shows when the boss nods approvingly at her positive statement--or how she turns off when a colleague looks for support to challenge the boss. Even if you can't come up with a label for her behavior, you've done some mental accounting of her personality, and this unconscious typing plays a part in all of your encounters with her. Each and every day, we are confronted with a flood of people whose personality quirks and qualities baffle and intrigue us, challenging our own ability to "deal" with them, to decide, in a moment, how to act and react in a variety of settings--at home, in school, on the job, and even on the street. We intuitively recognize that there are different personality types, but there is a much better way of looking at people, a deeper and more precise understanding of personality tMaccoby, Michael is the author of 'Productive Narcissist The Promise and Peril of Visionary Leaders', published 2003 under ISBN 9780767910231 and ISBN 0767910230.