Prince And Other Writings 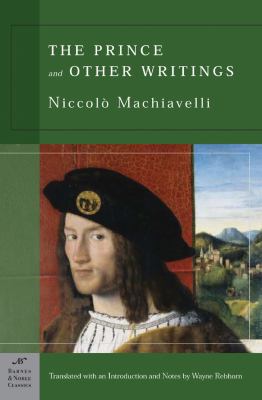 From Wayne Rebhorn's Introduction toThe Prince and Other Writings All of Machiavelli's works, and especiallyThe Prince, can be read as a series of responses to the crises he was living through, to the personal crisis he experienced when the Florentine republic fell in 1512, and to the larger crises involving Italian and international politics, the theoretical conception of the state, and the vision of the ruler. Or perhaps it would be better to say that his texts are not just passive responses to those crises, but active attempts to define, to give voice to, what was happening in the world around him, and indeed to promote action in that world as well. In them Machiavelli is asking over and over the same questions: why are we Italians so weak, so much unlike our Roman ancestors? Why have we become the prey of the larger states around us? And how can we remedy this situation? What sort of state and what sort of ruler will allow us not just to maintain our independence, but perhaps to regain some of the glory of ancient Rome? Bound up with these questions was Machiavelli's more personal one: why did I fail, and how can I get back the political role I once played in the republic? As he tries to answer these questions inThe Prince, theDiscourses, and his other works, he also grapples with the problem of how to make sense out of history, how to extract useful lessons from it so that we can avoid the mistakes of the past. Although Machiavelli theorizes about politics throughout his works, he takes pains to separate what he is doing from the work of pure theorists. Thus, at the start of chapter 15 inThe Prince, he distinguishes himself from those who "have imagined republics and principalities for themselves which have never been seen or known to exist in reality." Instead, he tells us, he writes aboutla verita effetuale della cosa, "the effectual truth of the matter." By "effectual truth" he means a truth--about politics as well as about human nature--that has aneffectin the real world, rather than something more purely speculative or contemplative. Although More'sUtopiamight seem to be the sort of work about an imaginary republic that Machiavelli is objecting to here, it was written in 1515 and 1516, some two years or so after Machiavelli started working onThe Prince. Nevertheless, More's thought-experiment about the best of all possible states grows out of a long tradition, which Machiavelli surely knew, of imagining ideal states and rulers, a tradition that stretches back into antiquity and that has Plato'sRepublicas one of its clear progenitors. Moreover, there was a genre of political writing to which both authors are responding in their books, a genre called thespeculum principis, the "mirror for princes," in which authors composed idealized portraits of princes and their duties in order to offer instruction to rulers and rulers in training. The great Dutch Humanist Desiderius Erasmus had written just such a volume, theInstitutio principis christiani(The Education of a Christian Prince), for Charles V, and published it in 1516. Like many works in this genre that stretch back well into the Middle Ages, Erasmus's book offers sober advice stressing the importance of Judeo-Christian morality as the basis for governing. While More'sUtopiafits quite comfortably into this genre in many ways, Machiavelli'sPrincecan almost be read as a parody of its idealistic moralizing, for his book repeatedly underscores the gap between morality and politics, insisting that a prince who tries to do good in a world full of bad people will inevitably come to grief. Machiavelli takes the name of the genre seriously: he tries to reflect in the &aMachiavelli, Niccolo is the author of 'Prince And Other Writings', published 2003 under ISBN 9781593080600 and ISBN 1593080603.