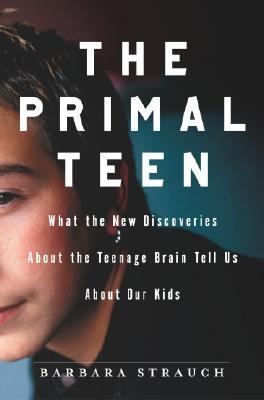 Chapter 1 Crazy by Design The New Science of the Teenage Brain Teen. Brain. Brain. Teen. The words, I concede, go more tongue in cheek than hand in hand. Utter them out loud--mention even that you're writing a book on the teenage brain--and the jokes come popping out, like pimples before a prom. "What? They have one?" "Short book." Steve, the father of two teenage boys, shook his head and wished me luck. As far as he could tell, the teenage brains he knew had recently and inexplicably gone berserk. "I don't get it," he said. "All of a sudden strange things are happening with the kids we know. These are good kids, bright kids, but the other day one stole some calculators from the high school and sold them, another can't finish any homework. Getting my own kids out the door in the morning now is this monumental thing. What's going on?" Denise, a writer and the mother of two lovely teenage boys, was ferocious. "Teenage brain? I'll tell you teenage brain," she told me one morning. "You know my thirteen-year-old? Well, he went to the school dance, and the rule is you have to stay inside and you can't leave. But he and his friends decided they were imprisoned, and so they went outside and ran in a big circle around the gym. Who knows what they were thinking, but the principal found out and called my husband at home. The next day, we talked and talked; we told him he had to apologize, that he had inconvenienced everyone. But he just couldn't get it; he couldn't get outside himself to understand things from someone else's point of view." And what was next from this thirteen-year-old, a straight-A kid who never caused a speck of trouble before and who, as his mother says, "used to be so meticulous and quiet and sweet?" One evening, Denise came home from work and found three letters waiting for her: One said her son had, as expected, been put on the honor roll, the second said he'd made all-county orchestra, and the third said he was being suspended from school after being caught hanging around downtown when he was supposed to be in history class. "You look at them and sometimes they're so articulate and they seem so grown up and you think they have all the pieces, but sometimes they just don't," said Denise. "I have to say that I believed, smugly, that only irresponsible, self-absorbed jerks had children who got into trouble. But something always happens. It's annoying; it's scary; it can make you crazy." As the mother of two teenage girls, I don't quibble with this. Annoying stuff happens, scary stuff happens. It can make you crazy. One morning not long ago my oldest daughter, then fifteen, got up (at noon) and to my delight--without being asked!--cleaned her room and lugged her laundry to the washing machine. Then, as the rinse cycle whirred and we talked in the living room--I suggested that it wasn't such a great idea to take her new CD player to an amusement park with water rides--she morphed, she mutated. Shooting up off the couch--in full-tilt pubescent display--she stomped upstairs, flinging over her shoulder the battle cry of the teenage warrior goddess, circa 2003: "You suck!" The world, of course, has been trying to figure out teenagers for centuries. Their behavior has baffled the best of our thinkers. Aristotle said teenagers appeared "fickle in their desires," which are as "transitory as they are vehement." Shakespeare, Romeo and Juliet aside, described adolescence as largely a time for "getting wenches with child, wronging the ancientry, stealing, fighting." And, if he spoke of their brains at all, which was rare, he dismissed them as "boiled." The first whiff from those boiled brains can be subdued, even subtle. Rhona, the mother of two teenaStrauch, Barbara is the author of 'Primal Teen What the New Discoveries About the Teenage Brain Tell Us About Our Kids' with ISBN 9780385503396 and ISBN 0385503393.