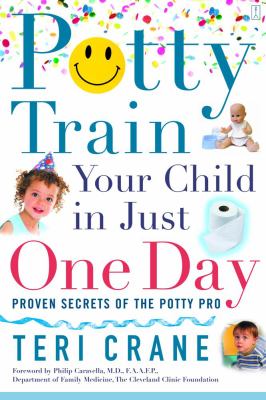 1. the secret's out -- potty parties are in! To every job that must be done, there is an element of fun. -- MARY POPPINS Every day I'm besieged by telephone calls from moms who are confused, frustrated, and overwhelmed. Mostly they're at wit's end. They beg me for the secrets to potty training their children. And no matter what their particular potty woes might be, how long they've been trying to train their child, or how harrowing their bathroom battles, I invariably recommend a single, one-size-fits-all solution: Have a One-Day Potty-Training Party! Kids love parties. In Toddler-Speak, a party means fun, games, cake, candy, presents, and prizes. For a two- or three-year-old, it doesn't get much better than that. In Mom-Speak, a party can mean a fun way to motivate your child to learn a new behavior -- in this case using the toilet. Giving your toddler motivation is critical to your success because when it comes to becoming toilet trained, most kids have absolutely no incentive. None. And when you look at it from their perspective, why would they? Life experience has proven that it's fast, easy, and convenient to go in their diapers. No matter how much you want your child to trade in her Huggies for big-girl underpants, chances are she will remain blissfully unmotivated by your desire or concern. Plus, if a child has had a negative experience with the potty, it can be even more challenging to entice him to try it again. According to the American Academy of Pediatrics, helping the 11 million children under the age of four through the potty-training process can be one of the toughest challenges for parents. Learning to use the potty is a key milestone in a child's development. Unlike other milestones associated with walking or talking, however, this developmental hurdle tends to be a source of considerable concern for both parent and child. A stressful potty-training period can damage a parent/child relationship and injure a child's self-esteem. But when this hurdle is successfully negotiated with a minimum of contention, it fosters a child's sense of independence and accomplishment. The One-Day Potty-Training Party is a fun, time-tested method for achieving potty-training victory. In the fast-paced, overscheduled, multitasking society in which we live, parents need a training tool that will teach them how to potty train their child in one day. The cost savings alone are enough incentive for most parents. And U.S. Census Bureau statistics indicate that American women are increasingly having more than two children. Even with our frantic schedules, we can attack this parenting challenge in an organized, structured fashion, with help from a tested routine. And as this book will demonstrate, that means a well-planned and exciting potty party! There are a number of driving forces behind the push for quick and effective potty-training programs: Most preschools in the United States mandate that children cannot be promoted to the next level unless they are potty trained. Today, a mere 13 percent of America's families fit the 1950s model of husband as breadwinner and wife as homemaker. According to the U.S. Bureau of Labor Statistics, more than 60 percent of all marriages, 45 percent of the working population, are dual-career marriages. And nearly two-thirds of America's children attend some sort of out-of-home care on a regular basis. According to the Children's Hospital Guide to Your Child's Health and Development, 40 percent of three-year-olds still use diapers. Thirty-nine states and the District of Columbia spend a total of more than $1.9 billion a year on some sort of prekindergarten. The National Center for Health Statistics has reported that the number ofCrane, Teri is the author of 'Potty Train Your Child in Just One Day Proven Secrets Of The Potty Pro', published 2006 under ISBN 9780743273138 and ISBN 0743273133.