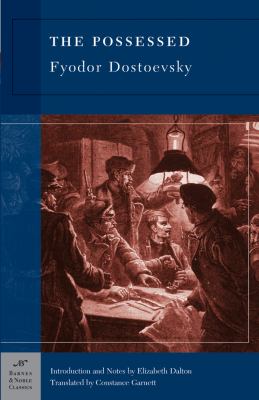 From Elizabeth Dalton's Introduction toThe Possessed The Possessedis the greatest novel ever written about the politics of revolution. It prefigures the political novels of Conrad, Malraux, and Koestler, as well as the work of Camus. Published in 1871, Dostoevsky's novel foretold with uncanny prescience events that would occur almost fifty years later during the Bolshevik Revolution and the Communist tyranny that followed. Its "possessed" characters, unleashed on a sleepy provincial town, wreak destruction as if in the grip of demonic possession, thereby foretelling what will happen in real life when, as one of them says, "Russia will be overwhelmed with darkness, the earth will weep for its old gods." The novel's relevance, however, is not limited to Russia and its revolution. With its cast of idealistic murderers and suicides, seductive madmen and glamorous fanatics,The Possessedis a novel for our time as well. The political theme is interwoven with a tragic love story and framed in a chronicle of provincial life rich in comic characters and incidents. In the end, however, everything leads to the central concerns of all Dostoevsky's work: his tortured debate with himself over Christianity and the existence of God, and his penetrating analysis of the psyche, of both its ecstatic visions of harmony and its darkest and most perverse impulses. Freud, who claimed that creative writers were the true discoverers of the unconscious, drew his own conception of the unconscious partly from his reading of Dostoevsky, whom he considered the greatest of all novelists. The inner life of the mind has been the subject of modern literature as well as of psychoanalysis. The representation of the psyche by the great modern writersamong them Joyce, Proust, Gide, Woolf, Kafka, Faulkner, and Beckettowes a great deal to Dostoevsky's dissections of the minds of Stavrogin, Kirillov, and the other heroes and antiheroes of his novels. AlthoughThe Possesseddeveloped far beyond Dostoevsky's original intention, it began as a polemic. In a letter of March 1870, he wrote, "What I'm writing is a tendentious piece; I want to state my opinions fervently. (The Nihilists and Westernizers will start yelling about me that I'm a reactionary!) But to hell with themI'll state all my opinions down to the last word" (Complete Letters, vol. 3, p. 246; see "For Further Reading"). As installments began appearing in theRussian Herald, a Petersburg monthly,The Possesseddid indeed arouse furious controversy: The left-wingers, the "Nihilists and Westernizers," saw it as a slanderous attack, and the right-wing Slavophils, the defenders of the monarchy and the Russian Orthodox Church, took it as an unqualified endorsement of their views. During the Communist era, the novel continued to be read as a political document, a reactionary attack on socialism, and for nearly forty years no separate edition could be printed, although it was available in an academic edition of Dostoevsky's collected works. Those who managed to read it, and who were themselves living through the era of arrests, trials, imprisonments, and executions it foretold, wondered how its author could have imagined so fully what had not yet happened. In fact,The Possessedwas based partly on real events. The immediate stimulus was the "Nechayev Affair" of 1869. A student named Ivanov, a member of a revolutionary group called the People's Avengers, was murdered by his fellow conspirators at the instigation of their leader, Sergey Nechayev, who convinced them that Ivanov was about to denounce them to the authorities. DostoeGarnett, Constance is the author of 'Possessed ', published 2004 under ISBN 9781593082505 and ISBN 1593082509.