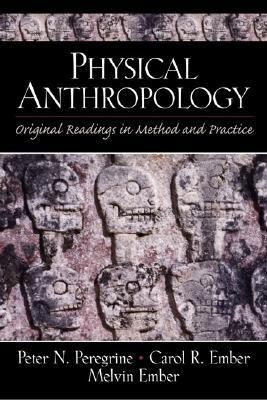 Which would you rather read: (A) "Fragments of the cranium were exposed by heavy surface erosion," or (B) "I found the skull after a huge rainstorm washed away the soil covering it"? If you answered B, then this book is for you. Most collections of articles that are used in undergraduate courses are made up of works patched together from material written by anthropologists for other anthropologists or, in some cases, for a popular audience. Rarely are works included that were written explicitly for college students. This is a problem, for often works written for scholars are too detailed and jargon-laden for students to digest easily, while works written for a popular audience contain little information that would be new to students who have already been exposed to physical anthropology. This book, on the other hand, is composed of chapters written explicitly for college students. The chapters are not reprints of articles published elsewhere, but were composed for you, a student of physical anthropology, to help you appreciate the methods, practices, and experiences of some of the top physical anthropologists working today. How do the chapters in this book differ from those in other collections? Usually when we read an article or book chapter about a piece of research, we find out about the results--what the researchers think they have discovered, what they think they know. Rarely do we get to understand the process. Where do ideas come from? How does an idea get transformed into a research project? What was exciting about the research? What was disappointing? What is the person behind the process like? These questions are rarely addressed in scholarly writing, and they are often absent even in popular accounts of research. Here these questions are central, for the anthropologists who wrote the chapters in this collection wanted to help you understand the process of discovery. They wanted you to understand not only what they found, but also how they went about finding it, and what the experience was like. Most of all, they wanted to excite you about physical anthropology--not only about the findings in physical anthropology, but also about the process of doing physical anthropology itself. The purpose of this collection is to make research in physical anthropology more alive for students like you who are just beginning to get to know physical anthropology. While the articles in the first four parts focus on "standard" topics in physical anthropology courses, they are not dry expositions on methods and data; rather, each article brings the experiences and insights of an active scholar to the practical matters of doing physical anthropological research. The authors all provide examples from their own research to give you a better sense of what physical anthropologists actually do in the field and laboratory. Part I, "Evolution," introduces basic concepts of biological evolution and evolutionary theory. Part II, "Primate Evolution," examines the evolution of the primate order and some of the theories about primate origins. Part III, "Human Evolution," explores our australopithecine and early human ancestors, and considers how and why modern humans evolved. Part IV, "Modern Human Variation," considers both the nature and causes of physical variation among contemporary peoples. The authors of the chapters in these four parts try to convey a feeling for the research process by focusing on a particular topic or issue. If the issue is one that scholars disagree about, the authors convey a feeling for the dynamics of research and the excitement of debate, the variety of questions asked by physical anthropologists, and the diverse methods they use to answer them. Part V, "Physical Anthropologists at Work," is a bit different from the parts that precede it, as it includes two autobiographical articles. We left it up to these two authors to choose what they wanted to write about. After all, we waPeregrine, Peter N. is the author of 'Physical Anthropology Original Readings in Method and Practice', published 2001 under ISBN 9780130939791 and ISBN 013093979X.