Philosophy The Quest for Truth 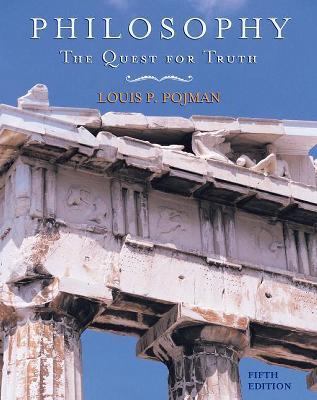 Praised for its accessibility and comprehensiveness, Philosophy: The Quest for Truth provides an excellent selection of classical and contemporary readings on nineteen key problems in philosophy. Louis Pojman has carefully organized the essays in each section so that they present pro/con dialogues that allow students to compare and contrast the philosophers' positions. Topics covered include the nature of philosophy, the existence of God, immortality, knowledge, the mind-body question, personal identity, free will and determinism, ethics, political philosophy, and the meaning of life. The fifth edition offers selections from Plato, René Descartes, John Locke, David Hume, William James, Bertrand Russell, John Hick, John Hospers, and James Rachels--as well as essays by Aristotle, Thomas Aquinas, Blaise Pascal, Thomas Hobbes, George Berkeley, Immanuel Kant, Gilbert Ryle, Albert Camus, Jean-Paul Sartre, Friedrich Nietzsche, Alvin Plantinga, and many others. In Philosophy: The Quest for Truth, 5th edition, Pojman offers substantial introductions to each of the nineteen philosophical problems. In addition, each of the seventy-three readings is accompanied by an individual introduction with a biographical sketch of the philosopher, study questions, and reflective questions that challenge students to analyze and critique the material. Short bibliographies following each major section, an appendix on how to read and write philosophy papers, and a detailed glossary further enhance the text's pedagogical value. Invaluable for introductory courses in philosophy, this highly acclaimed text inspires and guides students' quest for wisdom. The fifth edition adds new study questions and nine new articles: * Father F. C. Copleston and Bertrand Russell: "A Debate on the Argument from Contingency" * Corliss Lamont: "Freedom of the Will and Human Responsibility" * Richard Taylor: "Fate" * Louis Pojman: "A Critique of Ethical Egoism" * Robert Paul Wolff: "In Defense of Anarchism" * Brian Barry: "A Cosmopolitan Theory of International Society" * Thomas Nagel: "The Absurd" * Thurgood Marshall: "The Death Penalty Is a Denial of Human Dignity" * Burton Leiser: "The Death Penalty Is Permissible"Pojman, Louis P. is the author of 'Philosophy The Quest for Truth', published 2002 under ISBN 9780195156249 and ISBN 0195156242.