Phantom Chronicles New Tales of the Ghost Who Walks! 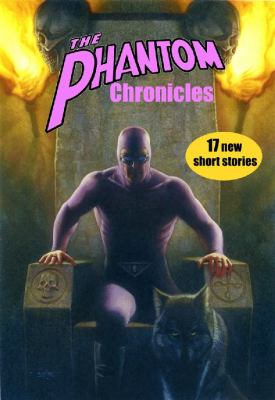 17 new prose short stories of the PHANTOM! High adventure and intrigue in the African jungle, on the high seas, and in the city! There is always justice that needs to be served, whether it's in the present...or the past. Nearly five centuries ago, during a daring raid at sea, pirates took the life of merchant ship captain Christopher Standish. In the heat of the pitched battle aboard the ship, Standish's son was knocked overboard to wash ashore on a remote beach where he was found by a friendly pygmy tribe. After stumbling upon the body of his father's killer, young Standish swore an oath on the murderer's skull to devote his life, and the lives of his sons and their sons, to the destruction of piracy, greed, cruelty and injustice. To the outside world, this man, seemingly immortal, has always worn the mask. As the legend grew, it transcended the life of any one mortal. And that legend became THE PHANTOM! Interior illustrations by Disney sculptor extraordinaire Ruben Procopio! And an introduction by The Phantom's creator's (Lee Falk) daughter Valerie! ustice!!!!! Take a look at this great line up of authors: Craig Shaw Gardner ("Battlestar Galactica", "Buffy the Vampire Slayer"), Jim Alexander, David Bishop, Mike Bullock, Ron Fortier, Steven Grant, Clay & Susan Griffith, CJ Henderson, Nancy Kilpatrick, Len Kody, David Michelinie, Will Murray, Mike Oliveri, Martin Powell, Ed Rhoades, Trina Robbins, and Dan Wickline. Cover: Doug Klauba *** DIAMOND EXCLUSIVE: LIMITED Hardcover edition= (limited to 400) Comes signed by cover painter Doug Klauba and has a signed and numbered exclusive (to this edition) Phantom Sketch tip sheet as well! $36.95 (signed copies and tip sheets limited to initial orders only) *Other books from Moonstone on the Phantom: The Phantom: The Ghost Who Walks: 1933076097 The Phantom: Death in the Deep Woods 1933076062 The Phantom: Legacy: 1933076119 The Phantom: Law of the Jungle 1933076127 *This book would appeal to fans of: Heroes (TV show), Indiana Jones, Batman. *Other works by the authors: by Craig Shaw Gardner: *Battlestar Galactica: "Cylons Secret" 0765315793 *Buffy the Vampire Slayer: "Return to Chaos" 0671021362 by Nancy Kilpatrick: *Jason X #3 1844161838 by Steven Grant: *The Punisher: Circle of Blood 0785123318 by David Michelinie: Spiderman: Carnage in New York 0425167038 By Trina Robbins: Wild Irish Roses:Tales of Brigit, Kathleens, & Warrior Queens 1573249521 Animation work by the artist: The Lion King Fox & the Hound Little Mermaid TarzanGentile, Joe is the author of 'Phantom Chronicles New Tales of the Ghost Who Walks!', published 2007 under ISBN 9781933076225 and ISBN 1933076224.