Perseus Spur An Adventure of the Rampart Worlds 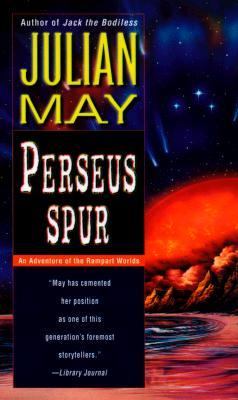 It's a given: if the Hundred Concerns are determined to destroy you, fighting back is hopeless. But I was a proud and pigheaded man. I never doubted that I'd be vindicated, because justice and righteousness were on my side; so I fought. And of course I lost. When my final appeal to the Interstellar Commerce Secretariat disciplinary tribunal was denied and I was Thrown Away, some important part of my personality shattered, plunging me beyond despair into a deadly apathy. My marriage to Joanna DeVet had ended, and I'd managed to alienate most of my family, my few remaining friends, and the handful of colleagues at the Secretariat who had stood by me during the scandal. I had no money left, no possibility of earning an honest livelihood, and as a Throwaway, I was eligible for only the most meager public assistance. My spiritless inertia made even the obvious solution impossible. Finally, the only one who ever believed that I was not guilty as charged, my older sister Eve, offered to pay my passage to a planet in the Perseus Spur, a perfect T-i world where subsistence living was feasible and human predation at a minimum. I said: Why not? It made sense for me to keep decently out of the way until I found the courage to do what most people seemed to expect of me. Improbably, I kept on living. Odder still, justice and righteousness did ultimately prevail. It took a while. But I'm still convinced that the Hundred Concerns would never have come tumbling down, changing the course of human civilization in our galaxy and defeating the Haluk invasion, if the sea monster hadn't eaten my house. The aftermath of a big storm had left the skies of Kedge-Lockaby overcast and windy that morning, hiding the comets and turning the normally gin-clear waters of the Brillig Reef murky with stirred-up sediment. The five sport divers who had hired me and Pernio, my aging submersible, for a holocam outing were noisily disappointed. Their names were Clive Leighton, Mario Volta, Oleg Bransky, Toku Matsudo, and Bron Elgar. They were a demanding and uncongenial bunch, a referral from an expensive hotel on the Big Beach. All of them were fit and under forty. All were outfitted with the most sophisticated and expensive cameras and diving gear. All except the one named Bron (who was very quiet and in some indefinable way seemed to be the leader of the pack) were charter members of the "been there, done that" club of smartasses. Clive, Mario, Oleg, and Toku described themselves curtly as Rampart Starcorp executives, and I assumed that close-mouthed Bron was another one, perhaps their boss. Even under the best of circumstances the quintet would have been difficult. On a below-par diving day like that one promised to be, they were a total shuck. My first mate, Kofi Rutherford, and I worked our buns off trying to please, but we bombed every time. We led a tour through the famous castle corals with their normally hilarious mome rath colonies--and the damned critters sulked in their holes. We moved on to my guaranteed crowd pleaser, the underwater forest of multicolored slithy toves--but their beauty was dimmed by the excessive amount of crud in the water. The albino borogoves drooped wanly and didn't sing a note. With the divers getting glummer and glummer, I tried to demonstrate the firecracker defense behavior of the brillig spongids at considerable risk to my own neck. Kofi coaxed a very pissed-off bandersnatch dodecapod partly out of its shell by offering himself as bait. The clients kept their cameras going, but they were not impressed. At the noon break, the diver named Bron was uncommunicative, while the other four complained that the buffet spread I had provided was not up to their gourmet standards. Furthermore, they groused, my watersleds were clunkers, my sub's head was out of toilet paper, and perhaps the trip should be cancelled and their card accounts credited. I smiledMay, Julian is the author of 'Perseus Spur An Adventure of the Rampart Worlds' with ISBN 9780345395108 and ISBN 0345395107.