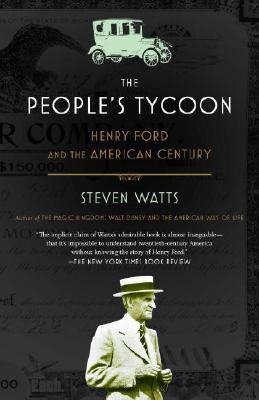 One Farm Boy By the early 1920s, Henry Ford may have been the most famous man in the world. His inexpensive, durable, and perky Model T had taken America by storm, and the pioneering industrialist had garnered enormous fame and wealth. The Ford visage seemed to appear everywhere, constantly. A torrent of interviews, newspaper stories, publicity handouts, advertisements, and popular biographies flooded into the public realm, carrying details of his life story and his comments on every imaginable topic. Often based on interviews with him, or legendary tales, these pieces told the story of Ford's life as he wanted it to be told. They poured the events of Henry Ford's life into the mold of the American success story. This hoary genre dated back to Benjamin Franklin and his autobiography of the penniless, bright, and determined youth who had walked into colonial Philadelphia munching on bread rolls as the first step in his meteoric rise to distinction. Horatio Alger had updated it for the nineteenth century with popular novels such as Struggling Upward and Mark the Match Boy. Now Ford sought to place himself squarely within this American mythology. His version of his life story could have been lifted from any one of Alger's cookie-cutter plots: the young man pursues his dream while others scoff, he undertakes a lonely journey from the country to the city in search of fulfillment, overcomes obstacles with a combination of pluck, determination, and talent, and finally rises to heights of achievement and prosperity. The Ford success story contained an additional element-the youthful hero had a stern father who was skeptical of the son's newfangled ambitions and sought to stymie his creativity. The struggle against paternal authority, with its Oedipal overtones, became a key to Henry Ford's rendering of his own early life. His ghostwritten book, My Life and Work (1922), a runaway best-seller, particularly highlighted this theme. Designed by Ford to popularize his ideas and enhance his legend, the book related how his father, William, sought to discourage his interest in machines. "My father was not entirely in sympathy with my bent toward mechanics. He thought that I ought to be a farmer," Ford told readers. When he finally decided to leave the farm, "I was all but given up for lost." Ford added that his later experiments with the gasoline engine while he was an electrical engineer "were no more popular with the president of the company than my first mechanical leanings were with my father." There was one problem, however, with this tale of triumph over overweening paternal domination: it was as much the product of Henry Ford's imagination as a picture of reality. The facts suggest a different story. Though tension between father and son certainly existed, its causes were more complex and its results much less melodramatic than the younger Ford related. In part, it resulted from clashing personalities and private needs. Henry Ford's oft-told tale of rebellion and triumph over his father reflected a fundamental trait in his personality: a deeply felt need to present himself as a self-reliant individual who fought to prevail against lesser opponents and skeptics. But this embroidery also went beyond personal issues. It was rooted in far-reaching currents of historical change that were broadly social as well as narrowly personal. By the late nineteenth century, America's industrial revolution was expanding explosively and beginning to overwhelm the traditional rural republic. Ford's story of rebellion, flight, and triumph was told thousands of times over as hordes of young men fled the countryside and streamed into urban manufacturing centers. This tidal wave of change, of which young Ford was a part, produced the machine age. Its alien values and unfamiliar landscape exhilarated many younger men, butWatts, Steven is the author of 'People's Tycoon Henry Ford And the American Century', published 2006 under ISBN 9780375707254 and ISBN 0375707255.