People of the Earth An Introduction to World Prehistory 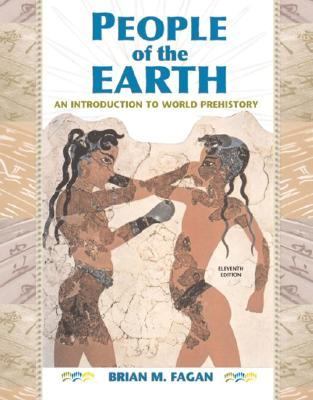 GOLDEN PHARAOHS, LOST CITIES, GRINNING HUMAN skeletons--archaeology is the stuff of romance and legend. Many people still think of archaeologists as adventurers and treasure hunters, like Indiana Jones of Hollywood movie fame seeking the elusive Holy Grail. This enduring image goes back to the late nineteenth century, when archaeologists like Heinrich Schliemann of Troy fame could still find lost civilizations and excavate three royal palaces in a week. Today, few, if any, archaeologists behave like Indiana Jones. They are scientists, not adventurers, as comfortable in an air-conditioned laboratory as they are on a remote excavation. The development of scientific archaeology from its Victorian beginnings ranks among the greatest triumphs of twentieth-century science. Archaeology has changed our perceptions of ourselves in profound ways, giving us a better understanding of our biological and cultural diversity. Welcome to the fascinating world of archaeology! The eleventh edition ofPeople of the Earthcomes at a time when new discoveries and archaeological methodologies are deeply affecting our understanding of the human past. This edition continues a more-than-30-year tradition of clear, jargon-free writing for the beginning student, the incorporation of the latest scholarship, and an accessible (five-part) organization of the story of world prehistory. This time, I have added both valuable new content and effective new pedagogy to what has always been a straightforward narrative. But the basic objective remains the same: to provide an interesting journey through the 7-million-year-old landscape of the human past. At the same time, the book attempts to achieve geographic balance, giving equal time to both well-trodden and less-well-known parts of the world. Any world prehistory that does otherwise is presenting a skewed picture of the human past.People of the Earthis an adventure in archaeology. I hope you enjoy your sojourn in its pages. Writing a straightforward narrative of human prehistory is a mammoth task, especially at a time when a torrent of new literature about archaeological discoveries around the world is revolutionizing our knowledge of the remote past. We are well beyond the point where a single author can possibly hope to keep up with every new find and intellectual development in world archaeology, but I have done my best, while trying to keep the narrative as simple and uncluttered as possible. The past five years alone have witnessed remarkable discoveries, among them new early fossil hominids from East Africa, major changes in our understanding of the evolution of modern humans, new perceptions of the beginnings of farming, and a revolution in our knowledge of short-term climatic change in the past. I Changes in the Eleventh Edition Our knowledge of world prehistory increases constantly, mostly in fits and starts, but occasionally in a dramatic way, when new fossil discoveries in Chad, in the Sahara Desert, rewrite an entire chapter of early human evolution, or the decipherment of Maya script adds a new dimension to our understanding of an early civilization. For the most part, however, the changes are relatively small and undramatic. The eleventh edition reflects a combination of a few major discoveries, like the 7-million-year-old mysterious primateSahelanthropus tchadensisin Chad, with numerous less spectacular, but nevertheless important, advances like new data on the origins of wheat in Turkey, new insights into the date of the famous Ice Man in the Italian Alps, and so on. Following reviewer suggestions, I have retained the same basic organization of the book for this edition. Chapter 1 introduces world prehistory and discusses new perceptions of the subject derived from new perspectives on the past. We survey alternative perspectives on the past and outline some of the important theoretical frameworks that influence our thinFagan, Brian M. is the author of 'People of the Earth An Introduction to World Prehistory', published 2003 under ISBN 9780131113169 and ISBN 013111316X.