Paula Deen Celebrates! Best Dishes And Best Wishes for the Best Times of Your Life 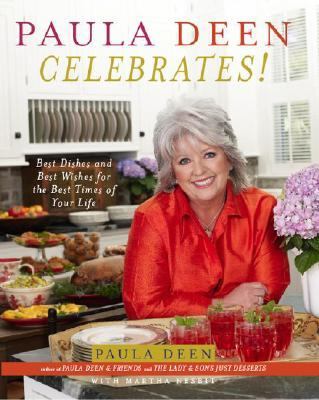 Introduction Hey, ya'll! In my last cookbook,Paula Deen & Friends, I introduced ya'll to a few of my girlfriends because I wanted them to share with ya'll how they put together menus for entertaining. In this book, I want to share with ya'll how I celebrate holidays and special occasions at my house along with my family. I need to tell ya up front that my first preference for entertaining is definitely casual, but that's not to say that when the old girl has to, she can't put on the dog. When Michael and I were planning our dream house on Turner's Creek, on Wilmington Island near Savannah, we wanted our home to be inviting. I wanted all my guests to feel like they were being embraced when they came in. I really love large rooms, and fewer of them, rather than a lot of smaller rooms. Our downstairs consists of our master bedroom and bathroom and walk-in closet, a laundry room, a living room, a morning room, a foyer, and a huge kitchen that has two farmhouse tables in it. At one end is an antique table that seats twelve people; at the other end is a small table that seats four people. Michael and I sit at the smaller table when it's just the two of us, and when we have family and friends in, we go to the long table. When Michael and I were building our kitchen, there were a few things that we just didn't want to do without. I had become so accustomed to commercial deep fryers in the restaurants that I felt like I just couldn't have a kitchen without one of those. I also felt like I couldn't cook without a convection oven like the ones we used in the restaurants. So, into my kitchen went two commercial pieces -- the big convection oven and the deep fryer. I have a five-burner drop-in cooktop on my island, and then under the ventihood, I have another four burners, and two ovens and a double-size griddle for when I have the family over and I'm making pancakes or grilling sandwiches. So, I have really made my kitchen very user-friendly, and the way my kitchen is set up, a lot of us can get in there at the same time and we're not stepping on each other. Outside, we have Michael's smokehouse -- really an open-air kitchen. It's got all of his barbecue grills, and a long counter for holding lots of food and lots of dishes. We like to throw Low-Country boils there, and barbecue our chickens, grill briskets, cook steak, and smoke ribs. We always like company around us because we've found it's easier to cook for a crowd than to cook for just the two of us. Inside or out, I love to celebrate with family and friends and just stand around and chitchat and cook. And there's just nothing like cookin' and eatin' out by that water. It just gives you a huge appetite. The important thing to me about this new book was the recipe selections. I didn't want ya'll to feel like you were seeing recipes that you had seen over and over and over again. Of course you'll find my favorites, but at the same time I wanted to give ya'll fresh, new recipes to add to your files. You know, there are so many different ways to update and freshen up recipes and I've said so many times, "A recipe is truly only a starting point." So, when it was time to start on this book, it was only natural that I would turn to my friend Martha Nesbit. Martha and I had worked onPaula Deen & Friends: Living It Up, Southern Style, and it was a very successful book. Martha and I see eye-to-eye on a great many things, and Martha's been testing recipes for twenty-five years. I know her and I trust her. She has taken my favorites, like my chicken potpie, and she's made sure the recipes will work in your kitchen for you just like they work in my kitchen for me 'cause you know that I do have a tendency to add a little of this and a little of that and by the time I get through with it, I don't know what's in it! For ideas for decorating for my parties, I turned to my personal assistant, Brandon BDeen, Paula is the author of 'Paula Deen Celebrates! Best Dishes And Best Wishes for the Best Times of Your Life', published 2006 under ISBN 9780743278119 and ISBN 0743278119.