Patrick Kennedy The Rise to Power 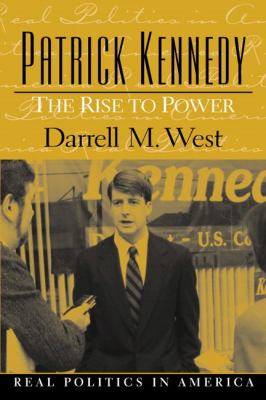 Preface It was the height of the US. House Republican impeachment effort against President William Jefferson Clinton. Speaking in the legislative chamber on December 18, 1998, conservative Bob Barr (Rep.-Ga.), the first member to introduce an impeachment resolution on Clinton over the Monica Lewinsky sex scandal, quoted President John F. Kennedy to buttress his point that no one was above the law. Using language from Kennedy's famous 1956 bookProfiles in Courage,Barr moralized, "Americans are free to disagree with the law but not to disobey it. For a government of laws and not of men, no man however prominent and powerful, no mob however unruly or boisterous is entitled to defy a court of law." Seething quietly as he heard the speech was Representative Patrick Kennedy, youngest son of Senator Edward Kennedy, nephew to President John Kennedy and former U.S. Senator Robert Kennedy, and cousin to a slew of young Kennedys. The 31year-old legislator, who had been elected to the House from Rhode Island in 1994, could not believe the outrage he was hearing. Barr was using Kennedy's beloved uncle to criticize a Democratic president whom Patrick supported! Kennedy was not going to take that lying down. Exploding out of his seat, Kennedy headed for the House Speaker's lobby just a few feet away from the floor. Spying Barr coming off the floor talking to reporters, Kennedy screamed at him, "How dare you! Anybody who has been to a racist group has no right invoking my uncle's memory." The charge was a reference to Barr's appearance at a meeting of the Council of Conservative Citizens, a white supremacy group. "Young man," Barr started to respond, "you are wrong. Young man, you are showing a lack of decorum." Kennedy immediately fired back, "I'm a duly elected representative of my state." The encounter ended with Barr sarcastically replying, "I'm impressed. I'm duly impressed." The outspokenness Kennedy demonstrated that day came naturally to the young man. After all, he was raised in one of the most famous families in America. Ever since his grandfather Joseph Kennedy's emergence on the national political scene in the 1920s and 1930s, the Kennedy name has been synonymous with wealth, power, and celebrity. His uncle's rise to the presidency in 1960 and efforts to energize government ushered in an era of political activism personified by the Peace Corps, the space program, and a call for civil rights. John F. Kennedy inspired a new generation into public service, including a young Bill Clinton. JFK's tragic assassination in 1963 truncated the nation's hopes, but soon a new legacy was born. Jackie Kennedy's graceful mourning during her husband's funeral--the first time such an event had been televised live nationally--deepened public respect for the Kennedys. Before long, the Camelot legend was flourishing, helped along by a sympatheticLifemagazine article by Theodore White. The 1968 assassination of Robert Kennedy and the subsequent ups and downs of Senator Ted Kennedy's career reinforced America's fascination with the family. Fueled by the tabloidization of the country's press and the emergence of new television shows such asA Current Affair, Hard Copy,andInside Edition,Americans followed the trials and tribulations of the Kennedy family with unparalleled interest. Now a new group of Kennedys has come along to extend the dynasty to a new generation. If the Kennedys are America's royal family, then Patrick Kennedy is the political crown prince. Within a decade, he has risen from a reformer in the Rhode Island legislature to being a leader in Congress. A passionate spokesperson for the less fortunate, he is one of his party's top fund-raisers as chair of the Democratic Congressional Campaign Committee. Over the last three elections, he has raised millions of dollars for himself and his party. He ranks fifth in the House Democratic leadership and is a cWest, Darrell M. is the author of 'Patrick Kennedy The Rise to Power', published 2000 under ISBN 9780130176943 and ISBN 013017694X.