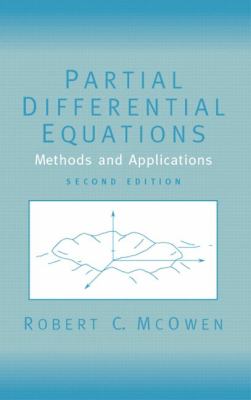 I am grateful that so many individuals and institutions have chosen to usePartial Differential Equations: Methods & Applicationssince it first appeared in 1996. I have been even more grateful to the many individuals who have contacted me with suggestions and corrections for the first edition. I hope that this new edition will be much improved because of their interest and contributions. The book originally evolved from a two-term graduate course in partial differential equations that I taught many times at Northeastern University. At that time, I felt there was an absence of textbooks that covered both the classical results of partial differential equations and more modern methods, such as functional analysis, which are used heavily in the current literature. Since I began to write the book, however, several other textbooks have appeared that also aspire to bridge the same gap:An Introduction to Partial Differential Equationsby Renardy and Rogers (Springer-Verlag, 1993) andPartial Differential Equationsby Lawrence C. Evans (AXIS, 1998) are two good examples. As with any book on such a broad and diverse subject as partial differential equations, I have had to make some difficult decisions concerning content and exposition. I make no apologies for these decisions, but I do acknowledge that other choices might have been made. For example, this text begins with the method of characteristics and first-order equations; although other texts often omit or slight this material in preference to the treatment of second-order equations, I have chosen to include it, and even emphasize its constructive aspects, because I feel it offers motivation and insights that are valuable in the study of higher-order equations. Indeed, the method of characteristics leads naturally to the Cauchy problem for higher-order equations, as well as the classification of second-order equations, which I treat in Chapter 2 (along with a discussion of generalized solutions). Following this momentum, I decided to treat the wave equation before Laplace's equation, even though this causes the use of eigenfunctions in a bounded domain to be delayed until the next chapter. Similarly, I have chosen to treat the heat equation after the Laplace equation for reasons of the maximum principle; of course, a bonus is that eigenfunction expansions are available for the heat equation in a bounded domain. Other texts treat these three second-order equations in different orders, and they all have their own reasons for doing so. Exposure to the use of functional analysis begins in Chapter 6 with a rapid survey of the basic definitions and tools needed to study linear operators on Banach and Hilbert spaces. The Sobolev spaces are introduced as early as possible, as are their application to obtain weak solutions of the Dirichlet problems for the Poisson equation and the Stokes system, before encountering the more subtle issues of weak convergence, continuous imbeddings, compactness, unbounded operators, and spectral theory. The theme of weak solutions is picked up again in Chapter 7, in the context of differential calculus on Banach spaces. The variational method of finding a weak solution by optimizing a functional, possibly with constraints, is applied to several problems, including the eigenvalues of the Laplacian. The forum of differential calculus also enables us to introduce, at this point, the contraction mapping principle, the inverse and implicit function theorems, a discussion of when they apply to Sobolev spaces, and an application to the prescribed mean curvature equation. The issue of the regularity of weak solutions is taken up in Chapter 8, where the basic elliptic L 2 -estimates are obtained by Fourier analysis on a torus, and transplantation to open domains. It is also natural, at this point, to discuss maximum principles for elliptic operators; and then the issues of uniqueness and solvabilityMcOwen, Robert C. is the author of 'Partial Differential Equations Methods and Applications', published 2002 under ISBN 9780130093356 and ISBN 0130093351.