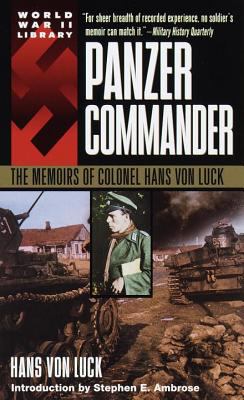 Prologue RELEASE It was a cold winter's day at the end of 1949 in a special camp for prisoners of war in the neighborhood of Kiev; at two o'clock in the morning a barrack door flew open. "Ganz von Luck," shouted a Russian guard. "Davai, to the office." I still have to smile: the Russians cannot pronounce the H sound. How amused we had been a few years earlier when at the shout of "Goggenloge" no one had stirred. Intended was Prince Hohenlohe. We German prisoners of war had been in Russia since June 1945; since the late autumn of 1948, former members of the SS and the police, and also all those who had fought against partisans, had been collected into a kind of punishment camp. Also included- something none of us could understand-were all staflf officers. Drunk with sleep I stood up. The Russians were fond of interrogations by night. It was easier to extract something from a tired pasoner. A few weeks earlier, the camp interpreter, a Jewish doctor with whom I had become friendly, had told me what was in the wind. "I have heard that under pressure from the Western Allies Stalin has agreed to observe the Geneva Conventions and release the prisoners. In the ordinary camps the releases are almost complete, but even here releases will be made. Fifteen percent will be condemned and remain here. We don't want to send home any war criminals. Besides, we need manpower." Not long after, commissions had indeed arrived from Moscow. At nocturnal hearings, by some system incomprehensible to us, 15 percent had to be sorted out; the rest really would be transported home. A five-person commission from Moscow would make the decision. And now it was my turn! My nerves were at breaking point. I forced myself to keep calm. I spoke good Russian; while a prisoner I had been able to improve my knowledge of the language and had often been used as an interpreter. At the office, the commissioners' interpreter, a young woman I knew well, was waiting for me. "I don't understand or speak a word of Russian," I whispered to her. "Understand?" She smiled and nodded; she would go along with my charade. I was led into a large room and saw in front of me a big, T-shaped table, at the head of which sat the commission. In the middle was a Russian colonel, apparently its leader, an affable-looking man of about my own age, bedecked with orders and with an almost square head. He looked like Marshal Georgi Zhokov, the "liberator" of Berlin. On either side were civilians, probably a public prosecutor and KGB officers. They looked rather less affable and stared at me with impenetrable expressions. At the other end of the table, about 20 feet away, I took my place with the interpreter. The hearing began. "What is your name? Your unit? Where were you in action in Russia?" The interpreter translated, I replied in German, "I have already said all that at least twenty times for the record." "We want to hear it again," said the Colonel. My statements seemed to agree with their documents. They nodded their approval. Then, "You capitalist, reactionary; von Luck is like von Ribbentrop (foreign minister under Hitler), von Papen (chancellor before Hitler). Everyone with 'von' is a big capitalist and a big Nazi." After the translation I replied, "I have nothing to do with Ribbentrop or Papen. I have been in the war for more than five years and then five years in captivity. That's more than ten years of my life. I should now like to live in peace with my family, follow a profession. I have neither money nor landed property, so what's all this about capitalist, Nazi, and so on?" The interpreter translated word for word. They didn't seem to have anything else to lay at my door. So the Colonel turned toVon Luck, Hans is the author of 'Panzer Commander The Memoirs of Colonel Hans Von Luck', published 1991 under ISBN 9780440208020 and ISBN 0440208025.