Other Voices, Other Rooms 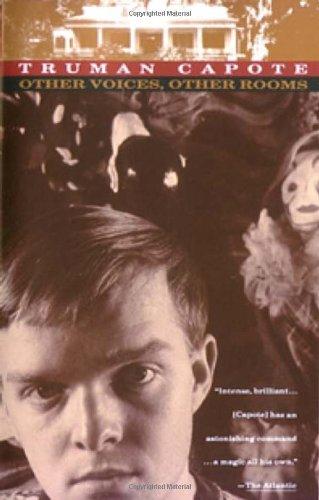 One Now a traveler must make his way to Noon City by the best means he can, for there are no buses or trains heading in that direction, though six days a week a truck from the Chuberry Turpentine Company collects mail and supplies in the next-door town of Paradise Chapel: occasionally a person bound for Noon City can catch a ride with the driver of the truck, Sam Radclif. It's a rough trip no matter how you come, for these washboard roads will loosen up even brandnew cars pretty fast; and hitchhikers always find the going bad. Also, this is lonesome country; and here in the swamplike hollows where tiger lilies bloom the size of a man's head, there are luminous green logs that shine under the dark marsh water like drowned corpses; often the only movement on the landscape is winter smoke winding out the chimney of some sorry-looking farmhouse, or a wing-stiffened bird, silent and arrow-eyed, circling over the black deserted pinewoods. Two roads pass over the hinterlands into Noon City; one from the north, another from the south; the latter, known as the Paradise Chapel Highway, is the better of the pair, though both are much the same: desolate miles of swamp and field and forest stretch along either route, unbroken except for scattered signs advertising Red Dot 5 Cigars, Dr. Pepper, NEHI, Grove's Chill Tonic, and 666. Wooden bridges spanning brackish creeks named for long-gone Indian tribes rumble like far-off thunder under a passing wheel; herds of hogs and cows roam the roads at will; now and then a farm-family pauses from work to wave as an auto whizzes by, and watch sadly till it disappears in red dust. One sizzling day in early June the Turpentine Company's driver, Sam Radclif, a big balding six-footer with a rough, manly face, was gulping a beer at the Morning Star Cafe in Paradise Chapel when the proprietor came over with his arm around this stranger-boy. "Hiya, Sam," said the proprietor, a fellow called Sydney Katz. "Got a kid here that'd be obliged if you could give him a ride to Noon City. Been trying to get there since yesterday. Think you can help?" Radclif eyed the boy over the rim of his beer glass, not caring much for the looks of him. He had his notions of what a "real" boy should look like, and this kid somehow offended them. He was too pretty, too delicate and fair-skinned; each of his features was shaped with a sensitive accuracy, and a girlish tenderness softened his eyes, which were brown and very large. His brown hair, cut short, was streaked with pure yellow strands. A kind of tired, imploring expression masked his thin face, and there was an unyouthful sag about his shoulders. He wore long, wrinkled white linen breeches, a limp blue shirt, the collar of which was open at the throat, and rather scuffed tan shoes. Wiping a mustache of foam off his upper lips, Radclif said: "What's you name, son?" "Joel. Jo-el Har-ri-son Knox." He separated the syllables explicitly, as though he thought the driver deaf, but his voice was uncommonly soft. "That so?" drawled Radclif, placing his dry beer glass on the counter. "A mighty fancy name, Mister Knox." The boy blushed and turned to the proprietor, who promptly intervened: "This is a fine boy, Sam. Smart as a whip. Knows words you and me never heard of." Radclif was annoyed. "Here, Katz," he ordered, "fillerup." After the proprietor trundled away to fetch a second beer, Sam said kindly, "Didn't mean to tease you, son. Where bouts you from?" "New Orleans," he said. "I left there Thursday and got here Friday . . . and that was as far as I could go; no one come tTruman Capote is the author of 'Other Voices, Other Rooms', published 1994 under ISBN 9780679745648 and ISBN 0679745645.