Operation Homecoming Iraq, Afghanistan, And the Home Front, in the Words of U.S. Troops And Their Families 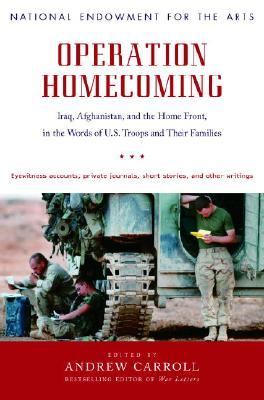 Chapter 1 CHAPTER ONE And Now It Begins heading into combat I remember the golden globe in the vast courtyard between the two buildings and a spattering fountain next to cold stone benches. Inside, I would look up in awe at the cathedral-like glass, the suspended walkways, and the grand, vaulted ceilings rising ten stories, crowned with a diadem of crystal chandeliers. I remember the large fabric hanging artwork. I can still smell the concourse level's red carpets when they were new. I was eleven. I remember sitting on those red carpets, reading my schoolbooks, imagining I was in the city's most elegant reading room. Now, up there on floors so high no hook and ladder could ever reach, a man in a tattered and burned white business shirt stands in a broken window with flames licking at him and smoke billowing around him. I see someone let go, briefly flying. I read later hundreds did the same. Hundreds. I remember spending many summer afternoons and twilights as a teenager sitting on top of the South Tower, sometimes reading poetry or a book, the raucous sound of the city muted and far below. I was listening only to the air passing by me, my mind wandering. A second plane slams into the South Tower. The explosion sounds like thunder. I remember closing my eyes outside in the open air up there and feeling the sun's warmth on my face. No matter how hot it was on those city streets below, there were always cool breezes at more than a thousand feet up. The Tower would gently sway from the wind. It was unnerving at first, but after a while, I remember feeling comforted like a child being rocked back and forth. I wasn't worried she'd tip over. Ever. The president addresses the nation and the world. He says to us, the Armed Forces, "Be ready." I am. Forty-four-year-old Petty Officer First Class Gregory S. Cleghorne, born and raised in Brooklyn, New York. Antoinette Personal Narrative Captain William J. Toti Just before 9:00 a.m., as word spread rapidly throughout the Pentagon, military and civilian personnel alike began huddling around television sets to watch breaking news about a plane crashing into one of the World Trade Center towers in New York City. "I am sitting at my desk when I hear someone yell, 'Oh my God!'" forty-four-year- old Captain William J. Toti wrote in a detailed, present-tense account of what he was doing on September 11, 2001. Toti had enlisted in the U.S. Navy at age seventeen, while he was still in high school, and eventually became a career submariner. In 1997, he was given command of the nuclear fast-attack submarine USS Indianapolis, based in Pearl Harbor, Hawaii, and named after the legendary World War II cruiser. On the morning of September 11, Toti was in the Pentagon, serving as the special assistant to the vice chief of naval operations. "I glance up at the television to see the World Trade Center on fire," he continued in his narrative. I walk into my outer office, turn up the volume, and hear the anchor theorize that the cause of impact is some sort of technological malfunction. We know immediately that there is no way navigational failure could cause an airliner to fly accidentally into a building on a bright clear day. By the time the second plane hits the Trade Center's South Tower, we all realize this is a major terrorist attack. What Toti and his colleagues did not know was that a third plane, American Airlines flight 77, was heading straight for them. I quickly go back to my desk to call my wife, but nobody is there. I leave a voice message, telling her to take the kids out of school, stay home, and keep the telephone lines open. As I hang upFull Cast Production Staff is the author of 'Operation Homecoming Iraq, Afghanistan, And the Home Front, in the Words of U.S. Troops And Their Families', published 2006 under ISBN 9781400065622 and ISBN 1400065623.