On the Frontline A Personal Guidebook for the Physical, Emotional, and Spiritual Challenges of Military Life 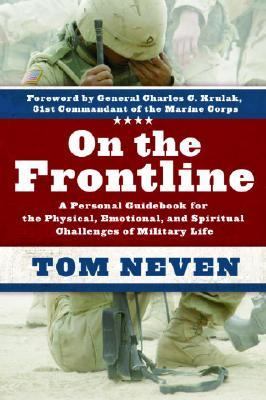 Challenge. The word could be synonymous with "military." In fact, you probably entered the military welcoming the challenge, seeking to test yourself against the best. You wanted to prove you have what it takes, and youdidprove it. You earned a place in the United States military, the most powerful fighting force known to man. You have gained hard-won experience. and you're making your mark in the military. But, of course, the demands don't get any lighter. There is no other profession as pressure packed as serving in the armed forces. Some days you love it, I know. And some days you probably ask yourself why you chose this career path. The good news is that God has you where you are for a reason, and he wants to use you in a way that will amaze even yourself. The pressure and hardship might seem overwhelming at times, but you serve a limitless God. And not only that, you number among the most disciplined and the most highly trained warriors on the planet. Obedience and discipline are keys to success in the military, just as they are in the Christian life and life in general. The lessons you are learning will serve you well for the rest of your life. In Iraq, our military is battling not only the insurgency but also the incredible, stifling heat. It fills the air and radiates from the ground. If you don't stay hydrated, you can die. First Lieutenant Adam Morehouse, an artillery officer by training, is all too familiar with the deadly desert heat. It can become almost a living thing that crushes the breath out of men and women conducting missions in Iraq. And the demands are mental as well as physicalthe pressure can be overwhelming. Morehouse describes a battalion-sized cordon-and-search missionin a neighborhood near Baghdad, conducted by the Second Infantry Division. His job was to take a team of soldiers and blockoff one of the highways into town. They were going to be sitting along a road, out in the open, for as long as ten hours. Long before the mission was to start, Morehouse racked his sleep-deprived brain:Does everyone know his job? Do we have everything we need? Will we get hit?He collapsed onto his cot, trying to get some rest. His fear was intense. He prayed to God, asking for wisdom and peace. Finally, he drifted off to sleep. "After I woke up," he said, "I felt almost a day-and-night change. I felt a complete sense of peace. I'd done everything I could. We were in God's hands." The mission went off without a hitch and without anyone getting hurt. Recently, Morehouse looked back at that experience. "It was the most tangible time in my life that God had directly, instantly, quickly answered a prayer in an obvious way," he said. Without his faith in God, Lieutenant Morehouse is not sure how he could have handled the pressure. "At every stage of your life you have to make a fresh decision to obey him," he said. "You can't make just one decision and coast on it for the rest of your life. You have to decide every day at being obedient to the Lord and work hard at it. I believe God has me in the Army for a reason, and I trust that he's still taking care of me. You have to continually seek God's face." Standing Up Under Pressure The pressure begins the moment you enter basic training. In fact, you feel the force of it as soon as you step off the bus. In my case, it was late, nearly midnight. I'd spent the past five hours on a Greyhound bus traveling from Jacksonville, Florida. We had a short layover in Savannah, Georgia, before pulling out of the bus station, over the towering Savannah bridge and into the night, headed into the South Carolina lowlands. I had only a vague idea of what lay ahead, even though I had volunteered for it. I sat by myself in the dark,Neven, Tom is the author of 'On the Frontline A Personal Guidebook for the Physical, Emotional, and Spiritual Challenges of Military Life', published 2006 under ISBN 9781400073351 and ISBN 1400073359.