Of Love and Other Demons 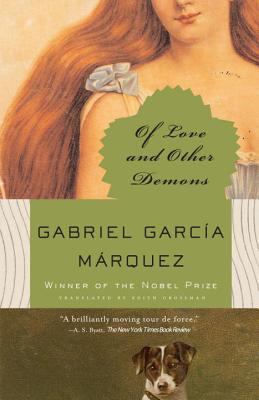 ONE AN ASH-GRAY DOG with a white blaze on its forehead burst onto the rough terrain of the market on the first Sunday in December, knocked down tables of fried food, overturned Indians' stalls and lottery kiosks, and bit four people who happened to cross its path. Three of them were black slaves. The fourth, Sierva Maria de Todos los Angeles, the only child of the Marquis de Casalduero, had come there with a mulatta servant to buy a string of bells for the celebration of her twelfth birthday. They had been instructed not to go beyond the Arcade of the Merchants, but the maid ventured as far as the drawbridge in the slum of Getsemani, attracted by the crowd at the slavers' port where a shipment of blacks from Guinea was being sold at a discount. For the past week a ship belonging to the Compania Gaditana de Negros had been awaited with dismay because of an unexplainable series of deaths on board. In an attempt at concealment, the unweighted corpses were thrown into the water. The tide brought them to the surface and washed the bodies, disfigured by swelling and a strange magenta coloring, up on the beach. The vessel lay anchored outside the bay, for everyone feared an outbreak of some African plague, until it was verified that the cause of death was food poisoning. At the time the dog ran through the market, the surviving cargo had already been sold at reduced prices on account of poor health, and the owners were attempting to compensate for the loss with a single article worth all the rest: an Abyssinian female almost two meters tall, who was smeared with cane molasses instead of the usual commercial oil, and whose beauty was so unsettling it seemed untrue. She had a slender nose, a rounded skull, slanted eyes, all her teeth, and the equivocal bearing of a Roman gladiator. She had not been branded in the slave pen, and they did not call out her age and the state of her health. Instead, she was put on sale for the simple fact of her beauty. The price the Governor paid, without bargaining and in cash, was her weight in gold. It was a common occurrence for a stray dog to bite people as it chased after cats or fought turkey buzzards for the carrion in the streets, and it was even more common during the times of prosperity and crowds when the Galleon Fleet stopped on its way to the Portobelo Fair. No one lost sleep over four or five dog bites in a single day, least of all over an almost invisible wound like the one on Sierva Maria's left ankle. And therefore the maid was not alarmed. She treated the bite herself with lemon and sulfur, and washed the bloodstain from the girl's petticoats, and no one gave a thought to anything but the festivities for her twelfth birthday. Earlier that morning, Bernarda Cabrera, the girl's mother and the untitled spouse of the Marquis de Casalduero, had taken a dramatic purge: seven grains of antimony in a glass of sugared rosewater. She had been an untamed mestiza of the so-called shopkeeper aristocracy: seductive, rapacious, brazen, with a hunger in her womb that could have satisfied an entire barracks. In a few short years, however, she had been erased from the world by her abuse of fermented honey and cacao tablets. Her Gypsy eyes were extinguished and her wits dulled, she shat blood and vomited bile, her siren's body became as bloated and coppery as a three-day-old corpse, and she broke wind in pestilential explosions that startled the mastiffs. She almost never left her bedroom, and when she did she was nude or wearing a silk tunic with nothing underneath, which made her seem more naked than if she wore nothing at all. She had already moved her bowels seven times when the maid who had accompanied Sierva Maria returned but told her nothing about the dog bite. She did, however, comment on the scandal at the port caused by the sale of the slave woman. "If she's as beautiful as you claim, she might be Abyssinian," said Bernarda. But even if sheGarcía Márquez, Gabriel is the author of 'Of Love and Other Demons', published 2008 under ISBN 9781400034925 and ISBN 1400034922.