Not Your Mother's Divorce A Practical, Girlfriend-To-Girlfriend Guide to Surviving the End of an Early Marriage 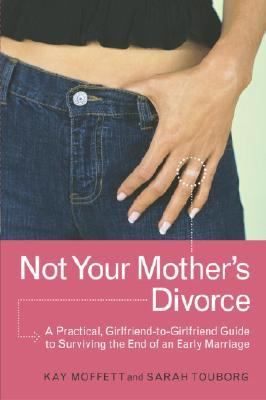 CHAPTER ONE Where Did Our Love Go? There are no events but thoughts and the heart's hard turning, the heart's slow learning where to love and whom. The rest is merely gossip, and tales for other times. --Annie Dillard, Holy the Firm Where did our love go? This is the million-dollar question. The question you ask yourself over and over again. The question others want to ask you when they hear the news, even if only the bold ones actually blurt it out. It's the black box at the wreckage site that no one can find and everyone's hunting for. We dedicate this first chapter to this question because it's the first one on everyone's minds, including yours. If you want to get straight to the nitty-gritty of the practical steps you can take to move on, feel free to skip ahead to chapter 2. But for those of you who want to take a closer look at why a marriage can end or what forces may have been at work in your own situation, this chapter is designed to give you some preliminary insight. There are many ways that your marriage may have ended. Countless ways. There might be Another Man or Another Woman. There may have been an infidelity of a different sort, say concerning finances. Maybe one of you began to question your sexuality. Perhaps somebody had substance abuse issues. Or maybe it was less dramatic: you just outgrew each other over time, having met when you were younger and changed significantly, for example, in a so-called quarter-life crisis. One of you may have recognized the shift in your marriage first, or maybe it dawned on both of you around the same time in a moment of truth. It may have slapped you in the face or it may have crept up on you slowly like a dull ache. Let's be realistic: getting married is always about taking a leap of faith, acting on a well-informed hunch, and like any other choice in life, the decision may not work out the way you had hoped. The statistics are there for all to see: approximately half of the married world (at least in this country, and Great Britain is close behind) gets divorced. Consider the many peers you have in Hollywood: Drew Barrymore, Angelina Jolie, Nicole Kidman, Jennifer Lopez, Julia Roberts, Meg Ryan--the list goes on. What's more, divorce is occurring earlier and earlier in marriage, with 25 percent of divorces taking place after only two years, according to Pamela Paul, author of The Starter Marriage and the Future of Matrimony. Paul also found that in 2000, over four million twenty- to thirty-four-year-olds reported their status as "divorced." The trend is being documented everywhere. In April 2001, Jane published an article entitled "Young, Hot, Divorced"; on July 12, 2001, the New York Times Home section ran an article called "Just Divorced, Gone Shopping," about the joys of retail therapy for the newly divorced at places like IKEA; and Paul published The Starter Marriage in 2002, about the growing trend of young, childless divorces. The point being you are not alone, and you are not a bad or freakish person. In fact, you are in excellent company. Until now, divorce was most likely something that happened to other people, people like your parents' friends or your friends' parents. But this is not your mother's (or mother's generation's) divorce. Partly because that older generation paved the way, there is much more acceptance and far less stigma than there ever has been toward divorce. In our postfeminist era, women have much greater social, economic, and political freedom, and this means that, despite the difficulty of the situation, you have many more choices and opportunities than your sisters of yesteryear. People will likely say to you, "Well, at least you didn't have children." And, in many ways, things are simply easier for you than for women who are older and/or have children andMoffett, Kay is the author of 'Not Your Mother's Divorce A Practical, Girlfriend-To-Girlfriend Guide to Surviving the End of an Early Marriage', published 2004 under ISBN 9780767913508 and ISBN 0767913507.