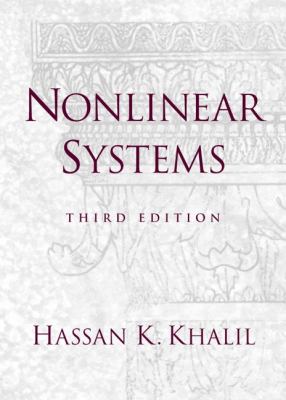 This text is intended for a first-year graduate-level course on nonlinear systems or control. It may also be used for self study or reference by engineers and applied mathematicians. It is an outgrowth of my experience teaching the nonlinear systems course at Michigan State University, East Lansing. Students taking this course have had background in electrical engineering, mechanical engineering, or applied mathematics. The prerequisite for the course is a graduate-level course in linear systems, taught at the level of the texts by Antsaklis and Michel 9, Chen 35, Kailath 94), or Rugh 158. The linear systems prerequisite allowed me not to worry about introducing the concept of "state" and to refer freely to "transfer functions," "state transition matrices," and other linear system concepts. The mathematical background is the usual level of calculus, differential equations, and matrix theory that any graduate student in engineering or mathematics would have. In the Appendix, I have collected a few mathematical facts that are used throughout the book. I have written the text in such a way that the level of mathematical sophistication increases as we advance from chapter to chapter. This is why the second chapter is written in an elementary context. Actually, this chapter could be taught at senior, or even junior, level courses without difficulty. This is also the reason I have split the treatment of Lyapunov stability into two parts. In Sections 4.1 through 4.3, I introduce the essence of Lyapunov stability for autonomous systems where I do not have to worry about technicalities such as uniformity, classkfunctions, etc. In Sections 4.4 through 4.6, I present Lyapunov stability in a more general setup that accommodates nonautonomous systems and allows for a deeper look into advanced aspects of the stability theory. The level of mathematical sophistication at the end of Chapter 4 is the level to which I like to bring the students, so that they can comfortably read the rest of the text. There is yet a higher level of mathematical sophistication that is assumed in writing the proofs in the Appendix. These proofs are not intended for classroom use. They are included to make the text on one hand, self contained, and, on the other, to respond to the need or desire of some students to read such proofs, such as students continuing on to conduct Ph.D. research into nonlinear systems or control theory. Those students can continue to read the Appendix in a self-study manner. This third edition has been written with the following goals in mind: To make the book (especially the early chapters) more accessible to first-year graduate students. As an example of the changes made toward that end, note the change in Chapter 3: All the material on mathematical background, the contraction mapping theorem, and the proof of the existence and uniqueness theorem have been moved to the Appendix. Several parts of the books have been rewritten to improve readability. To reorganize the book in such a way that makes it easier to structure nonlinear systems or control courses around it. In the new organization, the book has four parts, as shown in the flow chart. A course on nonlinear systems analysis will cover material from Parts 1, 2, and 3, while a course on nonlinear control will cover material from Parts 1, 2, and 4. To update the material of the book to include topics or results that have proven to be useful in nonlinear control design in recent years. New to the third addition are the: expanded treatment of passivity and passivity-based control, integral control, sliding mode control, and high-gain observers. Moreover, bifurcation is introduced in the context of second-order systems. On the technical side, the reader will find Kurzweil's converse Lyapunov theorem, nonlocal results in Chapters 10 and 11, and new results on integral; control and gain scheduling. To update the exercises. MoreHassan K. Khalil is the author of 'Nonlinear Systems (3rd Edition)', published 2001 under ISBN 9780130673893 and ISBN 0130673897.