Night Draws Near Iraq's People in the Shadow of America's War 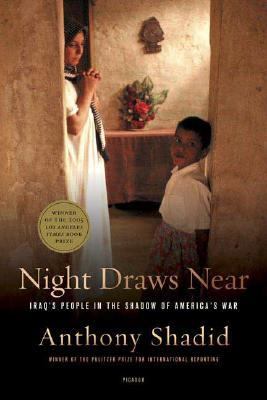 Chapter One The City of Peace Baghdad is a city of lives interrupted, its history a story of loss, waiting, and resilience. In the days before the American invasion in March 2003, this capital scarred by war after war felt torn, aggrieved, and filled with longing for the greatness it once possessed and has never forgotten. As we drove beneath a cloudless sky, the familiar voice of Abdel-Halim Hafez, one of Egypt's legendary singers, rose from the car's tinny speakers. Karim, my driver and friend, maneuvered his white Chevrolet along the avenues, as the city wavered between the anxious wait for American bombs and the fear of what Saddam would do to defend himself once they arrived. Knots of Baath Party militiamen manned sandbag emplacements, their nervous eyes shadowed by their berets or camouflage helmets or kaffiyehs of checkered reds and blacks. They stood in relief against the barricaded dun-colored utilitarian buildings constructed during the three decades of Saddam's rule. Nearby, the Tigris River meandered, its muddy waters encircling overgrown reeds that had never grown so high in gracious times. Along its banks were mosques with their hourglass domes of turquoise and gold, bricks in shades of blue, tiles with calligraphic contours of black and white. The colors of the city were softened by the afternoon sun into the hues of an antique Persian carpet. Through the car window, we could hear the call to prayer dividing the day, embracing the summons from other minarets and soothing the neighborhoods. Staccato bursts of hornsthe refrain of Arab citiesenlivened subdued streets, accompanied by the clatter of battered wooden carts pulled by weary horses, two men atop each. Behind them were loads of anabib, the kerosene cylinders used in the stoves of Baghdadi kitchens. Some were blue, some yellow, some rusted into a monochromatic brown. The drivers banged screwdrivers on the cylinders to announce their arrival, as they have done for decades. Karim and I were headed for the Hawar Art Gallery, but on the way we meandered a bit. I wanted to take a last, long look at Baghdad before the bombing began. We drove down colonnaded Rashid Street, a once grand boulevard named for the capital's most illustrious ruler. It was now collapsed, colored in the grays of poverty, its arches sagging and its shutters hanging at the slack angles of neglect. We passed a bust of Baghdad's founder, Abu Jaafar al-Mansur, in a dreary square of the neighborhood that takes his name. Its pedestal of tan brick was crumbled, its blue tiles fallen amid the plastic bags and cigarettes that littered the circle. The founder's eyes glowered beneath his turban, staring out over a jumble of garages, a gas station, shops, and cars with cracked windshields. Haggard already, the capital was immersed in uncertainty, awaiting another battle. Iraq had been waging wars for a generation, usually at Saddam's instigation. There was shame, in many quarters, over what had been done to Kuwait and Iran in Saddam's name. Iraq felt weary as the Americans prepared to invade; all the fighting over all the years had taken away much of the nation's generosity and dignity and left brutality. I had returned to Baghdad on March 11, 2003, five months after the opening of Abu Ghreib and just days before the bombing began. My previous itinerary had carried me through the bleak, post-9/11 Middle East. The American response to the destruction of that daythe martial rhetoric of the Bush administration, the dispatch of the U.S. military to Afghanistan, and the detention of prisoners at the military base in Guantanamo Bayhad evoked Arab anger as the lopsided conflict between Israel and the Palestinians accelerated further. Anyone who defiedShadid, Anthony is the author of 'Night Draws Near Iraq's People in the Shadow of America's War', published 2006 under ISBN 9780312426033 and ISBN 0312426038.