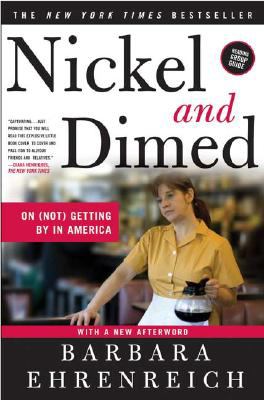 Introduction: Getting ReadyThe idea that led to this book arose in comparatively sumptuous circumstances. Lewis Lapham, the editor ofHarper's, had taken me out for a $30 lunch at some understated French country-style place to discuss future articles I might write for his magazine. I had the salmon and field greens, I think, and was pitching him some ideas having to do with pop culture when the conversation drifted to one of my more familiar themespoverty. How does anyone live on the wages available to the unskilled? How, in particular, we wondered, were the roughly four million women about to be booted into the labor market by welfare reform going to make it on $6 or $7 an hour? Then I said something that I have since had many opportunities to regret: "Someone ought to do the old-fashioned kind of journalismyou know, go out there and try it for themselves. " I meant someone much younger than myself, some hungry neophyte journalist with time on her hands. But Lapham got this crazy-looking half smile on his face and ended life as I knew it, for long stretches at least, with the single word "You. "The last time anyone had urged me to forsake my normal life for a run-of-the-mill low-paid job had been in the seventies, when dozens, perhaps hundreds, of sixties radicals started going into the factories to "proletarianize" themselves and organize the working class in the process. Not this girl. I felt sorry for the parents who had paid college tuition for these blue-collar wannabes and sorry, too, for the people they intended to uplift. In my own family, the low-wage way of life had never been many degrees of separation away; it was close enough, in any case, to make me treasure the gloriously autonomous, if not always well-paid, writing life. My sister has been through one low-paid job after anotherphone company business rep, factory worker, receptionistconstantly struggling against what she calls "the hopelessness of being a wage slave. " My husband and companion of seventeen years was a $4.50-an-hour warehouse worker when I fell in with him, escaping eventually and with huge relief to become an organizer for the Teamsters. My father had been a copper miner; uncles and grandfathers worked in the mines or for the Union Pacific. So to me, sitting at a desk all day was not only a privilege but a duty: something I owed to all those people in my life, living and dead, who'd had so much more to say than anyone ever got to hear.Adding to my misgivings, certain family members kept reminding me unhelpfully that I could do this project, after a fashion, without ever leaving my study. I could just pay myself a typical entry-level wage for eight hours a day, charge myself for room and board plus some plausible expenses like gas, and total up the numbers after a month. With the prevailing wages running at $6$7 an hour in my town and rents at $400 a month or more, the numbers might, it seemed to me, just barely work out all right. But if the question was whether a single mother leaving welfare could survive without government assistance in the form of food stamps, Medicaid, and housing and child care subsidies, the answer was well known before I ever left the comforts of home. According to the National Coalition for the Homeless, in 1998the year I started this projectit took, on average nationwide, an hourly wage of $8.89 to afford a one-bedroom apartment, and the Preamble Center for Public Policy was estimating that the odds against a typical welfare recipient's landing a job at such a "living wage" were about 97 to 1. Why should I bother to confirm these unpleasant facts? As the time when I could no longer avoid the assignment approached, I began to feel a little like the elderly man I once knew who used a calculator to balance his checkbook and then wentEhrenreich, Barbara is the author of 'Nickel and Dimed', published 2008 under ISBN 9780805088380 and ISBN 0805088385.