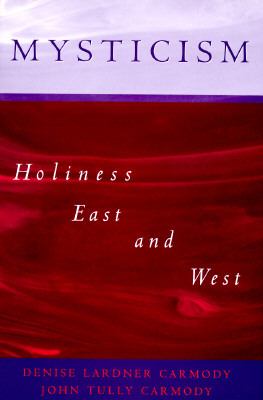 The particulars of a mystical experience color and shape its essence. But as Denise and John Carmody tell us, be it a Native American vision quest, or the intense soul-wrenching experience of a great storm, or a passionate love, or a dialogue in deep prayer with a personal divinity--any of these can be considered a mystical episode, if it draws us into a direct encounter with ultimate reality. In Mysticism: Holiness East and West, the Carmodys apply this broad definition of mysticism--a direct encounter with ultimate reality--to mystical experiences found in the world's great religions, providing insight into mysticism and into religious practice around the globe. The Carmodys offer an informative survey of the six major world religions--the Hindu, Buddhist, Chinese, Jewish, Christian, and Muslim traditions--and they also examine the religious practices of North American, Latin American, African, and Australian native peoples. They illuminate the history, principal beliefs, and teachings of each religion, and then examine the lives and works of each tradition's outstanding mystics. They show, for instance, how yoga has played a large role in the development of the mystical outlooks that we can trace to India, how prophecy has been significant in the mysticism of Judaism, Christianity, and Islam, and how shamanism has characterized oral religious practice. We learn how Greek ideas about God came to furnish the basic language of Christian mysticism, from the concerns of the desert fathers for virtue and vice, to the flights into the divine darkness of Gregory, Denis, and the author of The Cloud of Unknowing. Equally important, the Carmodys compare the mysticism found in one tradition with that found in the others, revealing how mystical practice varies widely from one religious group to the next. They find, for instance, that Jewish mystical experience has seldom been given to the magical flight practiced by native American shamans, nor has it over-regarded miracle working. Likewise, the book compares John of the Cross's negation of the self with the Indian doctrine of "not this, not that," which relates to the Buddhist idea of Nirvana. Mystical experience takes us to the center of the world, the source of all creation, the divine place where all that happens finds its sense. Yet it may well be the least understood dimension of humanity's yearning for ultimate meaning. In providing a comprehensive and accessible guide to mysticism, the Carmodys have done a major service for anyone seeking mystical experience and for all those interested in religion as practiced throughout the world.Carmody, Denise L. is the author of 'Mysticism' with ISBN 9780195088182 and ISBN 0195088182.