My Life The Presidential Years 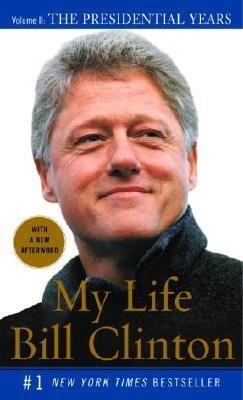 Chapter 1 PROLOGUE When I was a young man just out of law school and eager to get on with my life, on a whim I briefly put aside my reading preference for fiction and history and bought one of those how-to books: How to Get Control of Your Time and Your Life, by Alan Lakein. The book's main point was the necessity of listing short-, medium-, and long-term life goals, then categorizing them in order of their importance, with the A group being the most important, the B group next, and the C the last, then listing under each goal specific activities designed to achieve them. I still have that paperback book, now almost thirty years old. And I'm sure I have that old list somewhere buried in my papers, though I can't find it. However, I do remember the A list. I wanted to be a good man, have a good marriage and children, have good friends, make a successful political life, and write a great book. Whether I'm a good man is, of course, for God to judge. I know that I am not as good as my strongest supporters believe or as I hope to become, nor as bad as my harshest critics assert. I have been graced beyond measure by my family life with Hillary and Chelsea. Like all families' lives, ours is not perfect, but it has been wonderful. Its flaws, as all the world knows, are mostly mine, and its continuing promise is grounded in their love. No person I know ever had more or better friends. Indeed, a strong case can be made that I rose to the presidency on the shoulders of my personal friends, the now legendary FOBs. My life in politics was a joy. I loved campaigns and I loved governing. I always tried to keep things moving in the right direction, to give more people a chance to live their dreams, to lift people's spirits, and to bring them together. That's the way I kept score. As for the great book, who knows? It sure is a good story. ONE On Sunday, January 17, 1993 Al and Tipper Gore, Hillary, and I began inaugural week with a tour of Monticello, followed by a discussion of Thomas Jefferson's importance to America with young people. After the event, we boarded our bus for the 120-mile trip to Washington. The bus symbolized our commitment to giving the federal government back to the people. Besides, we cherished the fond memories it held, and we wanted one last ride. We stopped for a brief church service in the pretty Shenandoah Valley town of Culpeper, then made our way to Washington. Just as in the campaign, there were well-wishers, and a few critics, along the way. By the time we got to the capital, the public events of our inaugural, entitled "An American Reunion: New Beginnings, Renewed Hope," were already under way. My good friend Harry Thomason, advisor Rahm Emanuel, and Mel French, a friend from Arkansas who would become chief of protocol in my second term, had organized an extraordinary series of events, with as many as possible free of charge or within the price range of the working people who had elected me. On Sunday and Monday, the Mall between the Capitol Building and the Washington Monument was filled by an outdoor festival featuring food, music, and crafts. That night we had a "Call for Reunion" concert on the steps of the Lincoln Memorial, with a star-studded lineup including Diana Ross and Bob Dylan, who thrilled the crowd of 200,000 that filled the space from the stage all the way back to the Washington Monument. Standing beneath Lincoln's statue, I gave a short speech appealing for national unity, saying that Lincoln "gave new life to Jefferson's dream that we are all created free and equal." After the concert, the Gores and my family led a procession of thousands of people carrying flashlights across the Potomac River on Memorial Bridge to the LaClinton, Bill is the author of 'My Life The Presidential Years', published 2005 under ISBN 9781400096732 and ISBN 1400096731.