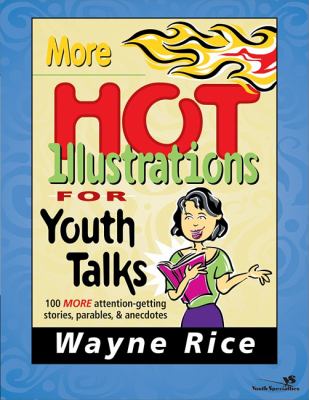 More Hot Illustrations for Youth Talks: 100 more attention-getting stories, parables, and anecdotes. Copyright © 1995 by Youth Specialties Youth Specialties products, 300 S. Pierce St., El Cajon, CA 92020, are published by Zondervan, 5300 Patterson Ave. S.E., Grand Rapids, MI 49503. Library of Congress Cataloging-in-Publication Data Rice, Wayne. More Hot illustrations for youth talks: 100 more attention-getting stories, parables, and anecdotes / [compiled by] Wayne Rice. p. cm. "Youth Specialties" Includes index. ISBN-10: 0-310-20768-1 ISBN-13: 978-0-310-20768-9 1. Youth sermons-Outlines, syllabi, etc. 2. Homiletical illustrations. I. Rice, Wayne. BV4310.M67 1995 251.08-dc20 95-35691 CIP Unless otherwise noted, all Scripture references are taken from the Holy Bible: New International Version (North American Edition), copyright © 1973, 1978, 1984 by the International Bible Society. Used by permission of Zondervan. "The Bridge Operator" is adapted with permission from "To Sacrifi ce a Son" by Dennis Hensley. Some stories in this book may contain fi ctionalized characters, events, or details. The illustrations are intended to communicate biblical, faith-related concepts as opposed to factual or historical accounts. Please use the stories with this in mind. The material in this book may be photocopied for local use in churches, youth groups, and other Christian-education activities. Special permission is not necessary. However, the contents of this book may not be reproduced in any other form without written permission from the publisher. All rights reserved. Edited by Noel Becchetti and Lorraine Triggs Typography and Design by J. Steven Hunt and PAZ Design Group Printed in the United States of America 01 02 03 04 05 06 07 - 20 19 18 17 16 15 14 13 12 11 10 9 A Candle in the Darkness Several years ago in Timisoara, Romania, Laszlo Tokes became pastor of Timisoara's small Hungarian Reformed Church. Tokes preached the Gospel boldly, and within two years membership had swelled to fi ve thousand. But success can be dangerous in a Communist country. Authorities stationed police offi cers in front of the church on Sundays, cradling machine guns. They hired thugs to attack Pastor Tokes. They confi scated his ration book so he couldn't buy food or fuel. Finally, in December 1989, they decided to send him into exile. But when police arrived to hustle Pastor Tokes away, they were stopped cold. Around the entrance of the church stood a wall of humanity. Members of other churches-Baptist, Adventist, Pentecostal, Orthodox, Catholic-had joined together to protest. Though police tried to disperse the crowd, the people held their post all day and into the night. Then, just after midnight, a 19-year-old Baptist student named Daniel Gavra pulled out a packet of candles. He lit one and passed it to his neighbor. When Tokes peered out the window, he was struck by the warm glow refl ecting off hundreds of faces. That moment, he said later, was the "turning point in my life." His religious prejudices evaporated. Here were members of the body of Christ, completely disregarding denominational divisions, joining hands in his defense. It was a moving testimony to Christian unity. The crowd stayed all through the night-and the next night. Finally police broke through. They bashed in the church door, bloodied Pastor Tokes' face, then paraded him and his wife through the crowd and out into the night. But that was not the end. No, the religious protest led-as it always does-to political protest. The people streamed to the city square and began a full-scale demonstration against the Communist government. Again Daniel passed out his candles.Rice, Wayne is the author of 'More Hot Illustrations for Youth Talks 100 More Attention-Getting Stories, Parables and Anecdotes' with ISBN 9780310207689 and ISBN 0310207681.