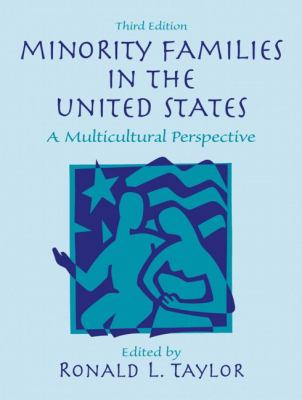 American families encompass a diversity of family forms and patterns, reflecting in some measure the varied and diverse cultural histories of the nation's ethnic and racial composition, and the influence of structured social inequalities on family resources and processes. This book focuses on minority families in the United States, that is, those families that have historically experienced social, economic, and political subordination vis-a-vis other families, as a consequence of their race, ancestry, or other assumed inferior traits or characteristics. The dominant minority groups in the. United States are African Americans, Hispanics, and Asian Americans. Each of these major groups is further characterized by a number of subgroups, cultures, and nationalities that contribute to even greater diversity in family patterns. Some writers prefer the term "ethnic" or "ethnic families of color" to "minority" as the identifying term for these groups and their families. However, since the term "minority" connotes the subordination of groups and their unequal access to sources of economic and political power in society, the term seems appropriate in view of the historical experiences and devalued status of African Americans, Latinos, and Asian Americans in the stratified hierarchy of American society. This volume brings together analyses of minority families organized around a common set of issues and themes, including historical influences on the nature of family organization among these groups, contemporary trends in family structure and living arrangements, and the influence of socioeconomic factors on family organization and processes, which enable the reader to appreciate significant similarities and differences between groups, as well as the considerable diversity within each of these broad categories, which is frequently ignored or glossed over in much of the family literature. For example, there are important differences in family processes and organization between African Americans and blacks of West Indian origin that are typically minimized or obscured in more global treatments of African American families. Much the same can be said regarding the treatment of Asian American and Latino families in the literature. The minority populations included in this volume were selected to represent the diversity of minority families, from those whose histories predate that of many of the European ethnic groups, to those of more recent origin, and to highlight the impact of historical and contemporary processes on the development of distinctive family lifestyles among these diverse groups. ABOUT THE SECOND EDITION To better reflect the growing diversity of minority families in the United States, new chapters on West Indian, Korean, and Asian Indian families have been added to the second edition of this volume. These groups, together with African American, Mexican American or Chicano, Puerto Rican, Cuban, Chinese, Japanese, Vietnamese, and American Indian populations included in this edition, represent more than 90 percent of the racial ethnic minority population in the United States and account for two-thirds of the 28 million people added to the United States population between 1980 and 1992. Beyond updating several chapters for which recent data were available and the addition of new chapters, the structure and the organization of the volume remain unchanged. The exception is the chapter on "Minority Families and Social Change" (Chapter 13), which has been expanded to include discussion of several emerging issues that are likely to contribute to even greater heterogeneity among and between minority families in the United States in the decades to come. One of the major frustrations experienced in revising the first edition was the unavailability of certain data on Asian Indian and American Indian populations from the 1990 census. Although the 1990 census provides a wealth of new data on these populatioRonald L. Taylor is the author of 'Minority Families in the United States: A Multicultural Perspective (3rd Edition)', published 2001 under ISBN 9780130165589 and ISBN 0130165581.