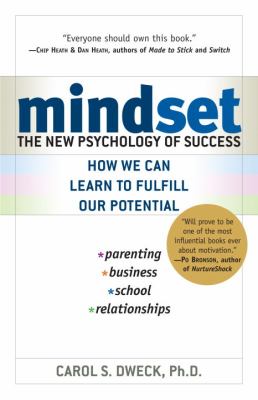 Chapter 1 THE MINDSETS As a young researcher, just starting out, something happened that changed my life. I was obsessed with understanding how people cope with failures, and I decided to study it by watching how students grapple with hard problems. So I brought children one at a time to a room in their school, made them comfortable, and then gave them a series of puzzles to solve. The first ones were fairly easy, but the next ones were hard. As the students grunted, perspired, and toiled, I watched their strategies and probed what they were thinking and feeling. I expected differences among children in how they coped with the difficulty, but I saw something I never expected. Confronted with the hard puzzles, one ten-year-old boy pulled up his chair, rubbed his hands together, smacked his lips, and cried out, "I love a challenge!" Another, sweating away on these puzzles, looked up with a pleased expression and said with authority, "You know, I was hoping this would be informative!" What's wrong with them? I wondered. I always thought you coped with failure or you didn't cope with failure. I never thought anyone loved failure. Were these alien children or were they on to something? Everyone has a role model, someone who pointed the way at a critical moment in their lives. These children were my role models. They obviously knew something I didn't and I was determined to figure it outto understand the kind of mindset that could turn a failure into a gift. What did they know? They knew that human qualities, such as intellectual skills, could be cultivated through effort. And that's what they were doinggetting smarter. Not only weren't they discouraged by failure, they didn't even think they were failing. They thought they were learning. I, on the other hand, thought human qualities were carved in stone. You were smart or you weren't, and failure meant you weren't. It was that simple. If you could arrange successes and avoid failures (at all costs), you could stay smart. Struggles, mistakes, perseverance were just not part of this picture. Whether human qualities are things that can be cultivated or things that are carved in stone is an old issue. What these beliefs mean for you is a new one: What are the consequences of thinking that your intelligence or personality is something you can develop, as opposed to something that is a fixed, deep-seated trait? Let's first look in on the age-old, fiercely waged debate about human nature and then return to the question of what these beliefs mean for you. WHY DO PEOPLE DIFFER? Since the dawn of time, people have thought differently, acted differently, and fared differently from each other. It was guaranteed that someone would ask the question of why people differedwhy some people are smarter or more moraland whether there was something that made them permanently different. Experts lined up on both sides. Some claimed that there was a strong physical basis for these differences, making them unavoidable and unalterable. Through the ages, these alleged physical differences have included bumps on the skull (phrenology), the size and shape of the skull (craniology), and, today, genes. Others pointed to the strong differences in people's backgrounds, experiences, training, or ways of learning. It may surprise you to know that a big champion of this view was Alfred Binet, the inventor of the IQ test. Wasn't the IQ test meant to summarize children's unchangeable intelligence? In fact, no. Binet, a Frenchman working in Paris in the early twentieth century, designed this test to identify children who were not profiting from the PDweck, Carol S. is the author of 'Mindset', published 2007 under ISBN 9780345472328 and ISBN 0345472322.