Metamorphosis and Other Stories 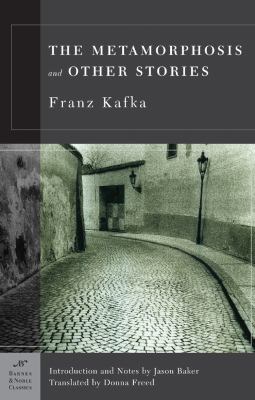 From Jason Baker's Introduction toThe Metamorphosis and Other Stories Franz Kafka's fiction doesn't make sense. Kafka was no doubt aware of the resulting awkwardness, and perhaps he hoped to hide from future readers when he asked his confidant Max Brod to destroy all his unpublished manuscripts upon his death. Kafka's writing is on the one hand specific and realistic, and on the other incomprehensible. His literary puzzles resemble the unreal landscapes and structures of M. C. Escher's drawings and lithographs. Actually, Escher's imagery offers a useful way to visualize Kafka's literature. As if leading the reader up and down endless staircases of logic, Kafka focuses on multiple dualities at once, all of which crisscross in three dimensions. Rather than a linear argument, Kafka writes a spiral one, which often makes readers dizzy, if not seasick. Interestingly, metamorphosis was one of Escher's favorite subjects, and three of his most famous woodcuts share this title with Kafka's novella.Metamorphosis, Anthony Thorlby argues, is the theme implicit in all Kafka's prose ("Kafka's Narrative: A Matter of Form"; see "For Further Reading"). Kafka's content is somehow incongruous with his form, and as a result, the language must either undergo a metamorphosis itself to accommodate his pen, or perish-and sometimes it does both. At its best, Kafka's prose is re-formed into a new mode of signification; at its worst, his words are deformed, depleted, meaningless. In striving to fit his impossible situations into the feeble vehicle of language, Kafka knowingly embarks on a failed enterprise. He attempts to express the inexpressible. The Metamorphosisof his writing, Kafka's real accomplishment, takes readers to a place at once familiar and unfamiliar. Intrigued by this immediacy, critics have celebrated Kafka for his "universality." This flattery overreaches perhaps, but the term "universal" was not picked by accident. Kafka's fiction examines a universe largely unexplored in the literature preceding him, one full of implications that venture into the remote regions of human psychology. It's a universe with different rules than those governing our reality. And there's no map. But Kafka's universe nonetheless resonates deeply with who we are and who we've become. Early readers who hailed Kafka's universality had never seen their lives in books, and they had only dimly recognized the "Kafkaesque" as an unnamed thing. Kafka was among the first to describe bourgeois labor and its degrading impact on the soul. In his fable "Poseidon," Kafka even portrays the god of the sea as consumed with tedious, never-ending paperwork. Kafka brings to mind a vocabulary of images-an endless trail of meaningless forms to be filled out, a death apparatus to rival Poe's pendulum, a man wearing a bowler hat, a gigantic insect. Thanks to interpretations like Orson Welles's film version of The Trial, Kafka's universe has expanded to include rows of office desks, oppressive light, and snapping typewriters. Kafka understood the trajectory of bureaucracy, and his literature predicts the nightmarish corporate world we live in today. Kafka's fiction, though concrete in its particulars, suggests an array of interpretive possibilities. "The Metamorphosis" alone has inspired Catholics to argue a case of transubstantiation, Freudians to extrapolate Gregor's castration by his father, and Marxists to infer the alienation of man in modern society. Kafka's descriptions vacillate between realism and allegory-a narrative style best described as parabolic. But unlike a traditional parable with an easy moral, Kafka's parables resist successful comprehension. This volume has as its parentheses Kafka's two best-known parables, "A Message from the Emperor" and "Before the Law." They both illustrate Kafka's near-nauseating ability to describe infinite regreKafka, Franz is the author of 'Metamorphosis and Other Stories', published 2003 under ISBN 9781593080297 and ISBN 1593080298.