Merchant of Dennis the Menace The Autobiography of Hank Ketcham 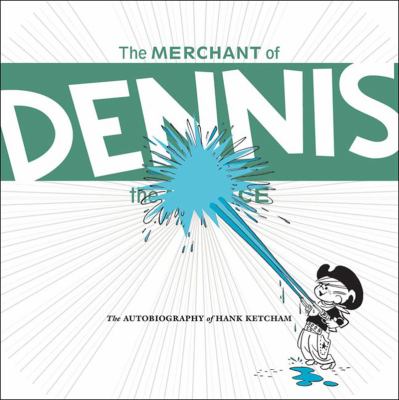 An illustrated memoir and scrapbook from the creator of "Dennis the Menace," Hank Ketcham, the self-styled "Merchant of Dennis," passed away in 2001 at the age of 81, but not before writing this engaging memoir. In this volume, the Dennis the Menace creator charmingly tells his own colorful story, starting when he was about "five-ana-half" and first picked up the "magic pencil." A child of the Great Depression from Seattle, Ketcham abandoned college for Hollywood, to pursue a dream of making drawings for Walt Disney films. Initially rebuffed at Disney, he persisted in huffing and puffing at the Mouse Factory door (all the while drawing "Andy Pandas, rabbits, squirrels, and monkeys" at Walter Lantz studio) until finally he was let inside to labor happily on "Pinocchio, Bambi, Fantasia" and a host of Donald Duck shorts. World War II intervened, but Photographer's Mate Ketcham was, nevertheless, able to resume his artistic career in the Navy, where, in Washington, D.C., he created cartoons for the War Bond program. Following the war, Ketcham developed into a successful freelancer, placing cartoons in "The New Yorker, Saturday Evening Post" and "Collier's," Then one fateful day, his harried wife screamed at him that his son Dennis was a menace! That, of course, sparked an idea that subsequently was sold to a newspaper syndicate in the fall of 1950. Within a year, "Dennis the Menace" was up to a hundred daily subscribers-a figure that climbed steadily. "The Merchant of Dennis the Menace" not only traces the humorous adventures of Hank Ketcham-with copious illustrations of his artistic development from a kid with an early knack for copying cartoon characters to a mature andmasterful artist of everyday life in the Mitchell and Wilson households-it also offers a special insight into the life and times of the half-pint "Menace." In one unique section, Ketcham takes us behind the scenes of "Dennis" and provides complete backgrounds for all the major characters, including their genealogies. We are also treated to official model sheets, in-depth analysis of each character's personality and motivations, and an exclusive peek at the private sketches that Ketcham referred to of rooms in the Wilson and Mitchell homes, their backyards, and the neighborhood. To top it all off, the book includes a dozen of Ketcham's hand-picked, all-time favorite strips.Ketcham, Hank is the author of 'Merchant of Dennis the Menace The Autobiography of Hank Ketcham', published 2005 under ISBN 9781560977148 and ISBN 1560977140.