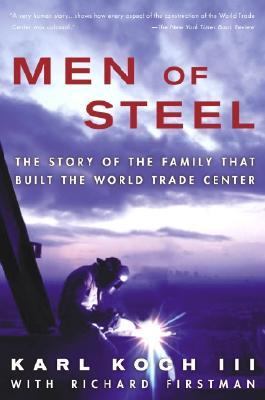 CHAPTER ONE Rivets and Rivers In the winter of 1908, my grandfather fell off the Manhattan Bridge. He had come to New York just a few months before, from western Pennsylvania by way of Buffalo. In those days, a man of his trade went where the work was, and in the first decade of the last century, that meant going to New York City. Grandpa was twenty-six at the time, married with a two-year-old son and a three-month-old daughter. The baby was named Gladys. The toddler was Karl Koch II. He was my father. Grandpa was an ironworker, a bridgeman. He was the man wielding the sledgehammer on the rivet gang, each of his blows pushing New York City and America just a tiny bit further into the new century. When I was young, I would run across old-timers who told me my grandfather's strength was legendary. It was said that there was not a union ironworker in New York who could put a beater to a rivet like my grandpa. On this particular day in the winter of 1908, he was banging rivets on the Manhattan Bridge, the third and last of the great suspension bridges built around that time to link Manhattan and Brooklyn, which had been separate cities until a decade before. This span would connect Canal Street on one side and Flatbush Avenue on the other, and after seven years of construction, the bridge was almost finished. It was about eleven o'clock in the morning when Grandpa lost his footing, or his balance, or his grip, while working on one of the bridge towers. This detail escaped my grandmother's reporting when she wrote about the mishap in the seventy-chapter (a page or two per chapter) personal history she typed up in 1964, when she was eighty, and left behind for posterity. According to Grandma, the East River was nearly frozen that day, and when Grandpa slipped off the bridge he went right through the ice. Fortunately for him (and for the eight more children he was to father), he was close enough to shore that his brother ironworkers were able to fish him from the river and drag him to the Manhattan side. Unconscious, he was rushed to the nearest hospital, which happened to be a private one not meant for a lowly ironworker, even a hypothermic one. Turned away, the ambulance driver tried the next-nearest hospital. Another private hospital, another refusal. Taking no more chances, he took Grandpa to the oldest public hospital in America, Bellevue, which hadn't turned anyone away since it opened in 1736. Grandma didn't hear about any of this until six hours after Grandpa hit the water, when two policemen came to their apartment in the Bronx. Grandma grabbed her neighbor, Mrs. Kopsky, and they hired a taxicab-something an ironworker's wife would do only in an emergency-and headed downtown to Bellevue, where they found Grandpa, still wearing his wet clothes. "Get me outta here," he said when he saw Grandma. He explained that when he got to the hospital, a nurse told him to undress. "I told her, 'If I was able to undress, I wouldn't be here.' " The nurse told him she couldn't handle a big man like him and that he would have to wait for the orderly, who was out for dinner. Grandma, Mrs. Kopsky, and the orderly eventually managed to get Grandpa into a wheelchair, onto the elevator, and into the taxi, which took him home to the Bronx. Grandma kept him covered in hot water bottles for two days, and by the end of the week, he was back banging rivets on the Manhattan Bridge. Karl William Koch was born in Williamsport, Pennsylvania, in the late spring of 1882-"Class of eighty-two," he liked to say-three years after his parents emigrated from Baden-WA?rttemberg, Germany. His father and my great grandfather, Charles Koch, settled the family in a burgeoning community of German immigrants who might have been reminded of their homeland when they looked out at the mountains beyond the Susquehanna River. Charles was one of fifteen or so Koches who had coKoch, Karl, III is the author of 'Men of Steel The Story of the Family That Built the World Trade Center' with ISBN 9781400049509 and ISBN 1400049504.