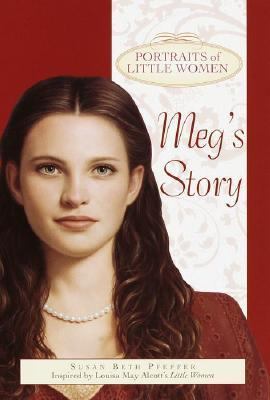 CHAPTER 1 Meg March looked at her slate and sighed. Would the school day never end? Ordinarily Meg enjoyed school. She loved to read, and she liked history as well. Her family was a part of American history. Two of her great-grandfathers had fought in the American Revolution. Even arithmetic, which was what her class was supposed to be working on just then, could be interesting. But not on the first day of June. Not when the sun was shining and the classroom, which had been cold all winter long, was warm enough to encourage dozing. Not when she and her sisters were halfway through their most recent play, which would, of course, star Meg and Jo. Beth had agreed to play the piano for the play, and Amy was now old enough to memorize lines and could be given small parts to perform. It was certain to be their best production ever. And the day was so lovely that when they got home, they could work on the play in the garden. So why wouldn't the school day end? Meg looked quickly toward Jo's seat. Jo was a year younger, and they were in the same classroom. Beth and Amy were in a classroom for younger children. Meg wondered if they were as impatient as she was for lessons to be over. Jo was, she knew, but Jo was impatient about everything. Meg feared she might explode, but fortunately the bell rang and the teacher dismissed the class. Meg noticed that he too seemed relieved, and she supposed it couldn't be fun to rein in the spirits of twenty-five children aged nine through eleven on a beautiful afternoon in June. Her parents frequently told her to be considerate of the feelings of others. Meg was pleased with herself that she cared about her teacher's feelings. She doubted Jo thought of him at all. In fact, Jo had already escaped from the school by the time Meg reached the front door. Meg waited a moment, until Beth and Amy appeared, and then they walked out together. Jo, she noted, was racing with some of the boys from their class. Jo was the best runner in their class, and she never minded letting the boys know that. "Jo isn't very ladylike," Amy said as they watched their sister win yet another race. "Jo isn't ladylike at all," replied Meg. "But you're a lady, Meg," said Beth. "I'm more of one than Jo, but not nearly as much of one as Amy," Meg replied with a laugh. "You can laugh," Amy said, "but I intend to marry great wealth someday, and I'll be more of a lady than anybody else in this town has ever been." "Concord has many ladies," Beth said. "Doesn't it, Meg? Aunt March is a lady. And Marmee is the best lady of all." "Amy means the kind of lady who wears silks and laces all the time," Meg said. "And doesn't make do with mended calicoes." "You have no right to complain," said Amy. "I have it worst of all. Practically every dress I've ever owned you wore once, then Jo and then Beth. It wouldn't be so bad if it were just you, or even you and Beth. But Jo rips everything, and I spend half my life in patches." She looked so mournful that Meg burst out laughing again. "Meg March! Wait for me!" Meg turned around and saw Mary Howe calling for her. Mary was in the same class as Meg and Jo. And she was definitely Amy's idea of a lady. It was clear that Mary had never worn a patched piece of clothing in her life. "Meg, I want to speak to you," Mary said as she joined the March sisters. "Certainly, Mary," said Meg. Beth, always shy, was hiding as best she could behind Meg. Amy was staring straight at Mary, drinking in the details of Mary's perfect blue dress and its white lace collar. "I'm having a picnic on Saturday," Mary announced. "My brother, Willie, and I. Mama said I could invite three girls and Willie could invite three boys. WilliPfeffer, Susan Beth is the author of 'Meg's Story' with ISBN 9780440413455 and ISBN 0440413451.

7 from $2.07
Loading marketplace prices 7 copies from $2.07 How does the rental process work?
View more