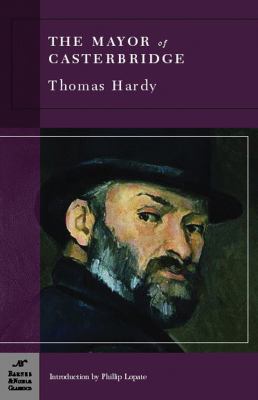 From Phillip Lopate's Introduction toThe Mayor of Casterbridge Inevitably, in analyzing this book, we must start with the novel's protagonist, since no other Hardy novel is quite so dominated by a single character. Michael Henchard has rightly been hailed as one of the unforgettable characters in fiction. "He takes his place at once with certain towering and possessed figures of Melville, Hawthorne, and Dostoevsky," wrote Albert Guerard (inThomas Hardy; see "For Further Reading"). The novel's subtitle, "The Story of a Man of Character," is meant to lead us directly into the knot of Henchard's personality. Some of Hardy's contemporary critics took exception to this formulation, since Michael Henchard errs so often that he seems precisely to lack what Victorian moralists would have called "character." However, we should remember what Hardy's contemporary, Friedrich Nietzsche, once wryly asserted: that making the same mistake over and over was a true sign of character. In any case, Hardy clearly uses the word "character" here less as approbation than as shorthand for the set of habits, traits, and foibles that may determine a person's destiny. To drive home that point, he even inserts in his text a quote from Novalis: "Character is Fate." When we first meet Michael Henchard, he is a young, disgruntled itinerant farmhand, unemployed and saddled with a wife and child. He is also a heavy drinker, which leads him into an appalling folly: He sells his wife, Susan, and baby girl, Elizabeth-Jane, at a county fair. In his bookThomas Hardy, Irving Howe comments on the shocking but also outrageously liberating undercurrents of this act, at least for some male readers: "To shake loose from one's wife; to discard that drooping rag of a woman, with her mute complaints and maddening passivity; to escape not by a slinking abandonment but through the public sale of her body to a stranger, as horses are sold at a fair; and thus to wrest, through sheer amoral willfulness, a second chance out of life--it is with this stroke, so insidiously attractive to male fantasy, thatThe Mayor of Casterbridgebegins. In the entire history of European fiction there are few more brilliant openings." Elaine Showalter, in "The Unmanning ofThe Mayor of Casterbridge," has correctively pointed out that Howe and many other male critics neglect to mention an aspect of the wife-sale that is potentially much more disturbing to women readers: It included their child as well. Awakening from his drunken stupor, he vows not to touch a drop of alcohol for the next twenty years. But he remains, as the novelist Rick Moody has shrewdly observed, "a dry drunk," with all the unresolved inner impulses of alcoholic sentimentality and hostility, now barely held in check by sobriety. Hardy skips over the next two decades, during which, we learn, Henchard has risen to become a wealthy, powerful grain merchant, and gotten himself elected Mayor of Casterbridge, the thriving town to which he has resettled. Initially, the sale of his family seems to have had just the sort of positive effect on the burdened Henchard that he intended. It releases his energies and talents, so that he is able to carve out a position of financial power and respect in a new place. True, he is alone, cut off from love and intimacy, but this seems to him a fair price to pay, on the whole. When his rejected wife Susan returns and seeks him out, he remarries her, mostly out of duty and penance. After she dies, a former lover of Henchard's, Lucetta, arrives on the scene, and a Hardyesque romantic triangle ensues between Lucetta, Henchard, and his Scottish assistant, Donald Farfrae. Eventually the wife-sale episode of twenty years earlier comes to light by happenstance in a police court at which Henchard is presiding. "On that day--almost at that minute--he passed the ridge of prosperity and honour, and began to descend rapidlyHardy, Thomas is the author of 'Mayor of Casterbridge ', published 2004 under ISBN 9781593083090 and ISBN 1593083092.