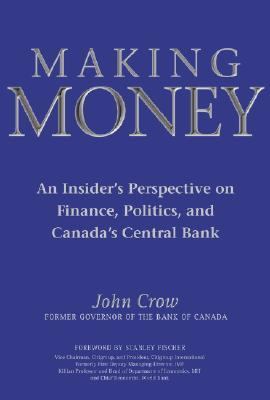 "At the core of any central bank is a governmental licence to print money- an alchemy of such general wonder and fascination that there is no shortage of running commentary." from the Preface Never a day goes by without matters of monetary policy being covered in the Canadian media. The value of our dollar, turmoil in global financial markets, economic growth vs. inflation, the possibility of a common North American currency. These are issues that constantly preoccupy our national psyche, and are particularly troublesome to a medium-sized, open economy that lives an uneasy coexistence next to the economic behemoth of the U.S. Although much ink has been spilled over such matters, never before has it come from one so experienced as an insider in one of Canadaa?s most influential, but least understood, institutions. John Crowa?s illustrious career at the Bank of Canada spanned twenty-one years, culminating in his seven-year term as Governor. In office through years of very controversial monetary policy, he is possibly one of the Banka?s best-known governors. Part memoir, part history, part analysis of major monetary policy issues, Making Money brings to life the inner workings and the politics of the Bank, an institution of central importance to the financial stability of the country. In such activities as determining interest rates and inflation targets, controlling the money supply, and even designing and issuing bank notes, the Bank has a profound effect on the daily life of every Canadian. Making Money also sheds light on how the Bank functions more broadly in Canadian society: its relationship with the government in general and the Minister of Finance in particular, the crucial questions of its independence and accountability, how it is linked to larger public policy, and its involvement in federal-provincial issues as well as on the international stage. Making Money offers a rare glimpse behind the curtain of Canadaa?s central bank: what it is, what it does, how it functions, and the policy choices and constraints it struggles with. This book demystifies the arcane art of central banking, proving that the Bank of Canada matters in the life of every Canadian, and showing what it takes to have a good policy for money, whether in Canada or in any country. Foreword by Stanley Fischer Vice Chairman, Citigroup, and President, Citigroup International; Formerly First Deputy Managing Director, IMF; Killian Professor and Head of Department of Economics, MIT; and Chief Economist, World Bank "Whether or not the reader agrees with [John Crowa?s] view, by the end of the book he or she will have been forced to wrestle with the basic issues of monetary policy in the modern world, by someone who has thought clearly and deeply about the issues, who expresses himself simply and cogently, and who makes an impressive case for his views." From the Foreword, by Stanley FischerCrow, John is the author of 'Making Money An Insider's Perspective on Finance, Politics, and Canada's Central Bank' with ISBN 9780470831809 and ISBN 0470831804.