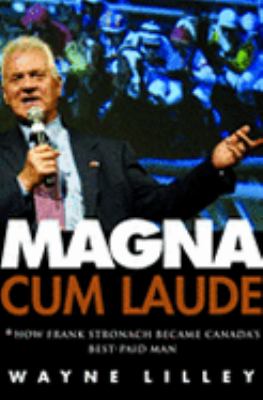 So on April 18, 1988, Stronach handed the job of ceo to Fred Gingl in order to seek the Liberal nomination in York Peel, a new suburban constituency that had been created in a rejigging of federal ridings. York Peel, as it happened, encompassed much of the York Simcoe riding that was held by Sinclair Stevens. THE CANDIDATE FROM MAGNA Stronach's inclination to throw resources (preferably Magna's) at projects wasn't an option when running for Parliament, thanks to election-spending restrictions designed to discourage plutocrats from buying their way into office. The limits, however, didn't apply at the earlier stage of seeking the party nomination to run. Backed by a campaign machine that included political consultants and full-time staff (some of whom were paid as Magna employees), Stronach hoped that by slathering cash around the riding to gain the nomination, any name recognition bounce he got would resonate until the actual election campaign. The bid for the local Liberal nomination by Canada's wealthiest wannabe politician became an exercise in wretched excess. After being introduced at a beauty pageant at a Portuguese community centre, he donated $15,000 to the centre in the name of Magna's many Portuguese workers. He provided buses to transport retirement home residents to a park for the day. And full-page campaign ads proved a boon to local newspapers (one of which Magna partly owned), who recognized Magna as the employer of many of their readers. He used his position at Magna just as effectively, initiating factory "information meetings" that he maintained were to educate employees about the impact of free trade. Occasionally, his enthusiasm got the better of him. Magna at one point offered to pay $10 per employee ($25 per family) to underwrite membership in the local Liberal party so employees could vote on the candidate of their choice. Stronach hastily ditched the plan when its illegality was pointed out to him, blaming the scheme on overzealous campaign workers. On the nomination day, though, he made sure that employees got time off or had shifts changed so they could attend a free barbecue with live music that he threw. Burton Pabst, his one-time partner, had left the Magna board, but was still a consultant for the company and recalls Stronach's campaign as something of an internal joke because of its overkill. "He'd truck in whole busloads of employees to yell and stuff," chuckles Pabst. "It was kind of fixed." Few of the newly enfranchised Liberals 1,000 of the party's 3,000 new members were Magna employees or family members failed to take the opportunity to exercise their voting right. In the end, Stronach spent $20,000 to $30,000 on his nomination campaign and breezed to a win over Tom Taylor, a long-time Liberal riding worker, whose total nomination budget was $9,500. INTO THE ELECTION: "LET'S BE FRANK" Turner may well have had some moments of trepidation at the prospect of Stronach winning the election, slated for November 1988. Toeing the party line, any party line, had not historically been Stronach's long suit. If anything, he was more inclined toward contrariness with respect to tradition and ideals that he hadn't initiated. But before the campaigning was under way, Brian Mulroney's Conservatives had some issues to settle as well. Chief among them was whether the party should endorse Sinclair Stevens, badly tainted by the Parker inquiry. As the Conservative candidate, he'd be running against Stronach. In the end, Mulroney robbed Canadians of the prospect of the former friends facing off; he refused to authorize Stevens's nomination in thLilley, Wayne is the author of 'Magna Cum Laude', published 2006 under ISBN 9780771052910 and ISBN 077105291X.