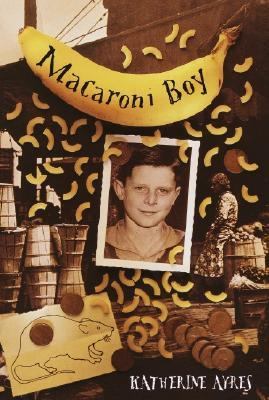 1 Macaroni Boy "Hey! You! Macaroni Boy!" Mike Costa whirled. He'd recognize that voice anywhere--Andy Simms, the worst kid in the Strip. And I have the rotten luck to have him sitting right next to me in Sister Mary John's sixth-grade class. As Mike searched the sidewalk and alley behind him, his fingers curled into fists. With weasel-faced Simms on the loose, a guy needed to be ready. "Macaroni Boy!" The shout came again, louder and closer this time. "I got a present for you." A small, round blur flew in Mike's direction. He jumped backward, but not in time. Something smacked hard against his legs, spattering as it landed. Cripes, a rotten apple. Before he could take a breath, two more apples hit, mashing brown goo onto his socks and shoes. "I'll get you for this," Mike shouted, running in the direction the apples had come from. "Got to catch me first!" Mike's shoes slapped against the pavement and he rounded the corner by a fruit market. As he raced onto the side street, he caught a glimpse of Simms, half a block ahead, ducking into an alleyway. Shoving past empty vegetable crates, Mike pushed his legs harder and turned into the alley, closing the distance between them. In the narrow brick confines of the alley, Simms was a moving shadow, but Mike was sturdy and fast. He reached out to grab at Simms' skinny shoulder. "Got you, you punk." "Says you, Macaroni Boy." Simms twisted away. Mike ran and reached again, this time catching a good grip on the sleeve of Simms' coat. "You're a louse, Simms," he growled. Pulling closer, he aimed his fist at the kid's jaw and let it fly. Simms ducked and the blow connected solidly with the side of his head. He grunted, then spun around and shoved, driving Mike belly-first into the railing of a fire escape. Simms yanked hard, freeing his arm. For a moment Mike couldn't move, couldn't even breathe, his chest hurt so bad. By the time he could stand up and look around, all he could see was a brick wall. He ran his fingers along his ribs--sore, but nothing felt broken. His lungs burned as he tried to catch his breath, but each time he breathed in, a rotting, apple-y smell hit him smack in the nose. He kicked at an empty tin can and sent it spinning up the alley, wishing he could kick Simms like that and send the bum into the cold, filthy water of the Allegheny River. Mom would get after him for this, Mike knew. She had enough to do, keeping up with all the ordinary washing and ironing, she didn't need extra. He dragged himself from the alley and checked his legs to see how bad the damage was. His knickers seemed clean enough, but reddish-brown apple slime covered his socks and shoes. Mike sped along Penn Avenue, past small shops and big food warehouses. He didn't stop until he reached 29th Street and his house. Ducking into the backyard, he peeled off his socks and shoes first. Cripes, even my legs are covered, he thought. If Mom sees this I'll be in for it. Maybe I can clean up quick and nobody will know. Careful as a cat burglar, he eased open the back door and peered into the kitchen. Nobody. He inched inside and headed for the cellar stairs. Once in the cellar, he grabbed a tin pail and set it under the hot water tap. While the pail filled, he collected old rags and the bar of strong soap Mom used for washing clothes. Phew. Even the cellar was starting to smell like rotten apples. Mike turned off the water, grabbed the bucket and his supplies and ran back upstairs and outside. The cold stone of the back step chilled his feet, but he didn't let that stop him, just sat down to scrub the mess off. Once his legs looked clean, Mike dried them on an old ripped towel, then dumped the stained socks into the pail, swishing them around to loosen the worst of the muck. "Hey there,Ayres, Katherine is the author of 'Macaroni Boy' with ISBN 9780385900850 and ISBN 0385900856.