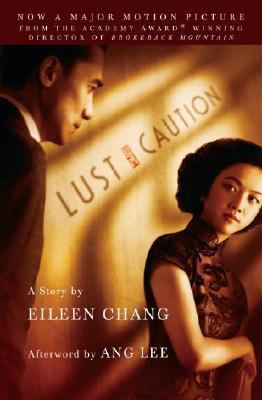 Though it was still daylight, the hot lamp was shining full-beam over the mahjong table. Diamond rings flashed under its glare as their wearers clacked and reshuffled their tiles. The tablecloth, tied down over the table legs, stretched out into a sleek plain of blinding white. The harsh artificial light silhouetted to full advantage the generous curve of Chia-chih's bosom, and laid bare the elegant lines of her hexagonal face, its beauty somehow accentuated by the imperfectly narrow forehead, by the careless, framing wisps of hair. Her makeup was understated, except for the glossily rouged arcs of her lips. Her hair she had pinned nonchalantly back from her face, then allowed to hang down to her shoulders. Her sleeveless cheongsam of electric blue moire satin reached to the knees, its shallow, rounded collar standing only half an inch tall, in the Western style. A brooch fixed to the collar matched her diamond-studded sapphire button earrings. The two ladies--tai-tais--immediately to her left and right were both wearing black wool capes, each held fast at the neck by a heavy double gold chain that snaked out from beneath the cloak's turned-down collar. Isolated from the rest of the world by Japanese occupation, Shanghai had elaborated a few native fashions. Thanks to the extravagantly inflated price of gold in the occupied territories, gold chains as thick as these were now fabulously expensive. But somehow, functionally worn in place of a collar button, they managed to avoid the taint of vulgar ostentation, thereby offering their owners the perfect pretext for parading their wealth on excursions about the city. For these excellent reasons, the cape and gold chain had become the favored uniform of the wives of officials serving in Wang Ching-wei's puppet government. Or perhaps they were following the lead of Chungking, the Chinese Nationalist regime's wartime capital, where black cloaks were very much in vogue among the elegant ladies of the political glitterati. Yee Tai-tai was chez elle, so she had dispensed with her own cape; but even without it, her figure still seemed to bell outward from her neck, with all the weight the years had put on her. She'd met Chia-chih two years earlier in Hong Kong, after she and her husband had left Chungking--and the Nationalist government--together with Wang Ching-wei. Not long before the couple took refuge on the island, one of Wang Ching-wei's lieutenants, Cheng Chung-ming, had been assassinated in Hanoi, and so Wang's followers in Hong Kong were keeping their heads down. Yee Tai-tai, nonetheless, was determined to go shopping. During the war, goods were scarce in both the unconquered interior and the occupied territories of the Mainland; Yee Tai-tai had no intention of wasting the golden purchasing opportunity offered by a stopover in the commercial paradise of Hong Kong. Someone in her circle introduced her to Chia-chih--the beautiful young wife of Mr. Mai, a local businessman--who chaperoned her on her shopping trips. If you wanted to navigate Hong Kong's emporiums, you had to have a local along: you were expected to haggle over prices even in the biggest department stores, and if you couldn't speak Cantonese, all the traders would overcharge you wickedly. Mr. Mai was in import-export and, like all businesspeople, delighted in making political friends. So of course the couple were incessantly hospitable to Yee Tai-tai, who was in turn extremely grateful. After the bombing of Pearl Harbor and the fall of Hong Kong, Mr. Mai went out of business. To make some extra money for the family, Mai Tai-tai decided to do a little smuggling herself, and traveled to Shanghai with a few luxury goods--watches, Western medicines, perfumes, stockings--to sell. Yee Tai-tai very naturally invited her to stay with them. "We went to Shu-yu, that Szechuanese restaurant, yesterday," Yee Tai-tai was telling the first black cape. "Mai Tai-tai hadn't been." "Chang, Eileen is the author of 'Lust, Caution ', published 2007 under ISBN 9780307387448 and ISBN 0307387445.