Life After Death The Burden of Proof 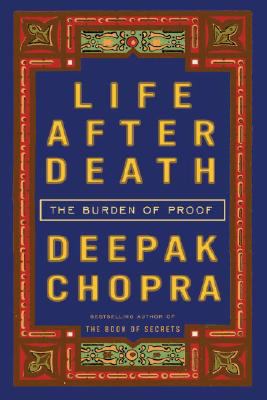 Memoir: The Life Beyond While writing this book on the afterlife, I kept being drawn back to stories that I'd heard in India as a child. Parables are a powerful way to teach children, and many of the ones told to me have lasted all my life. So I decided to weave the book around tales of the kind I heard at home, around the temples, and at school, hoping that the reader would be enticed by a world where heroes battle darkness in order to emerge into the light. In this case the hero is a woman, Savitri, and the enemy she must defeat is Yama, the lord of death. Yama shows up in her front yard one day, waiting to take away her husband the moment he returns from his work as a woodcutter. Savitri is terrified. What strategy could possibly turn Death away from his inexorable mission? I had no trouble imagining these characters. I was frightened for Savitri and anxious to find out how her battle of wits with Death turned out. Their world flowed easily into my own, because the India of my childhood was not that far removed from ancient India. I want to take a moment to convey what death and the world beyond meant back then. It may seem like a very esoteric place. If so, you can come back to it after reading the main body of the book. However mysterious and exotic, here is where I began. What was most magical in my childhood was transformation. Death itself was seen as a brief stopping point on an endless soul journey that could turn a peasant into a king and vice versa. With the possibility of infinite lifetimes extending forward and backward, a soul could experience hundreds of heavens and hells. Death ended nothing; it opened up limitless adventures. But at a deeper level, it's typically Indian not to crave permanence. A drop of water becomes vapor, which is invisible, yet vapor materializes into billowing clouds, and from clouds rain falls back to earth, forming river torrents and eventually merging into the sea. Has the drop of water died along the way? No, it undergoes a new expression at each stage. Likewise, the idea that I have a fixed body locked in space and time is a mirage. Any drop of water inside my body could have been ocean, cloud, river, or spring the day before. I remind myself of this fact when the bonds of daily life squeeze too tight. In the West the hereafter has been viewed as a place akin to the material world. Heaven, hell, and purgatory lie in some distant region beyond the sky or under the earth. In the India of my childhood the hereafter wasn't a place at all, but a state of awareness. The cosmos that you and I are experiencing right now, with trees, plants, people, houses, cars, stars, and galaxies, is just consciousness expressing itself at one particular frequency. Elsewhere in spacetime, different planes exist simultaneously. If I had asked my grandmother where heaven was, she would have pointed to the house we lived in, not only because it was full of love, but because it made sense to her that many worlds could comfortably inhabit the same place. By analogy, if you are listening to a concert orchestra, there are a hundred instruments playing, each occupying the same place in space and time. You can listen to the symphony as a whole or, if you wish, put your attention on a specific instrument. You can even separate out the individual notes played by that instrument. The presence of one frequency does not displace any of the others. I didn't know it as a child, but when I walked around the crowded Delhi market where more humanity was packed into one bazaar than was possible to imagine, the world I couldn't see was even more crowded. The air that I breathed contained voices, car noises, bird songs, radio waves, X-rays, cosmic rays, and an almost infinite array of subatomic particles. Endless realities lay all around me. Every frequency in nature exists simultaneously, and yet we experience only what we see. It's natural to fear what we can't sChopra, Deepak is the author of 'Life After Death The Burden of Proof', published 2006 under ISBN 9780307345783 and ISBN 0307345785.

8 from $1.86
Loading marketplace prices 8 copies from $1.86 How does the rental process work?
View more