Later Life The Realities of Aging 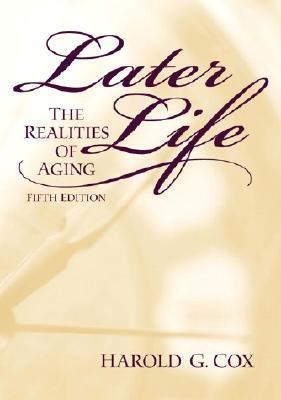 Preface The demographic revolution in modern industrial nations seems to have occurred because of a decline in the crude birthrate combined with an improved medical technology's capacity to save and prolong life. The result, in all of the industrially developed nations, has been the same--growing number and percentage of the population living to age 65 and beyond. Moreover, Donald Cowgill is projecting an ever-increasing expansion of the older population in the underdeveloped nations as well. l Barring unforeseen demographic changes in the near future, the number of older persons in Western Europe and the United States will continue to grow and constitute an ever larger percentage of the population. The elderly in the United States have grown from approximately 3 million in 1900, composing less than 4 percent of the population, to 31.1 million in 1992, approximately 12.5 percent of the population. This shift in the age composition of the American population has resulted in a growing public awareness of the problems, potentials, and realities of aging. Persons in their middle years now almost uniformly expect to live to retirement age and beyond. There is widespread interest in the quality of life of older Americans, expressed both by those approaching retirement and those already there. This widespread interest and concern about the lives of older Americans has produced innumerable articles and editorials from the popular press, increased interest and research by the scientific community, and the implementation of numerous government-sponsored service delivery programs for older Americans. This book attempts to integrate material from this proliferating body of research and writing into a meaningful discussion of the major trends and developments in the field we call gerontology. Reflecting the interdisciplinary nature of the subject, the book includes material from psychology, sociology, social work, anthropology, the biological sciences, medicine, and psychiatry. I have attempted to favor neither the medical model, which sees old age as a process of deterioration, disease, and progressive decline, nor the more recent and popular human development model, which sees old age as a period of further growth, development, and new experiences. While the later years are a further development of the individual's life history and offer opportunities for growth and new experiences, ultimately all people suffer certain health losses, and they die. Thus, I have tried to present the later phase of the life cycle as realistically as possible. The interdisciplinary nature of the gerontology tends to make texts on this subject eclectic. But in this book--written from a social science perspective--I utilize a symbolic interaction frame of reference. In this way the reader is provided with a single theoretical approach to the behavioral aspects of aging. Writing a text, much like teaching a class, involves synthesizing and organizing a variety of materials into an understandable, interesting, and challenging presentation of the facts. In the case of the textbook, the product should be interesting, understandable, intellectually challenging, and applicable to one's own life. Only you, the reader, can judge whether I have met these standards. I hope that I have. In any event, in writing a text an author inevitably learns much more than any future reader of it. His or her attempts to synthesize, organize, and present the material inevitably begin with a clear understanding of it. Thus, I have already gained much in writing this book; I have increased my knowledge of, sensitivity to, and comprehension of the realities of later life. In order to make this textbook more user-friendly for teachers using the book in their classes, a test manual is available with questions covering each chapter. In addition, if anyone has any questions about the book, test manual, or materials includCox, Harold is the author of 'Later Life The Realities of Aging', published 2000 under ISBN 9780130138316 and ISBN 0130138312.