Last Flag Down The Epic Journey of the Last Confederate Warship 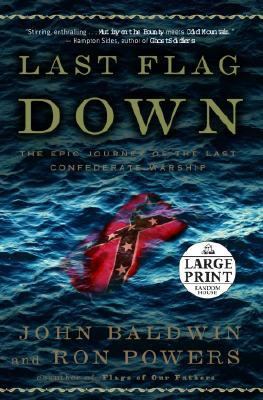 1 Coal. The Noble Cause bleeding to death, starving to death. The Northern aggressors with their dirty heels in the sacred ground of Louisiana, Georgia, Virginia; his generation largely in its graves, or soon to be. And here he was watching the empty horizon from a coal-laden merchant steamer off the coast of West Africa. Three decks below him, his crew bent to dismal duty, the drudgework of the high seas. They were securing the ship's bunker coalher fuel supplyand preparing her cargo, of yet more coal, for heavy weather. The description given to those sweating wretches who had to carry it out said it all: "coal heavers." Coal. A mundane cargo for this fine fast ship running now in front of the wind, racing for her life, almost due south, and almost diametrically away from the Confederate States of America. Within her, a cargo weighing almost as much as the ship itself and a valuable cargo indeed: 800 long tons of almost smokeless Welsh coal. A cargo so expensive its owners had sent a man on the voyage to look after it, to see it wasn't pilfered for fuel, to see it was delivered as planned. A cargo almost as mundane as the young "coal agent's" undercover alias: "George Brown." To be hauling coal, not Enfields, at this moment of the Confederacy's most parlous plight: Atlanta, proud citadel of the Confederacy, lost to Sherman; Lee in the trenches at Richmond since June; Sheridan's cavalry chasing Jubal Early's ragged men up the Shenandoah Valley, burning the fields and barns and mills behind them. Norfolk, Virginia, or those remnants that had not been burned, was now under martial law; indeed, the homes of "Brown's" family, the Whittles, the Sinclairs, the Pages, those still standing, were occupied by Federal troops. The South that the young man had known as a glittering nation unto itself, a kingdom of honor and deep traditions, where family names reached back in time until they seemed to merge with the land itselfthis Old South was now a scorched, bleeding thing, its armies ground up by the cold advancing Union machine. The war was in its brutal, inexorable end-game. Sea King, since leaving London days ago, seemingly irrelevant to it all, had plodded toward the southern seas with a consignment of coal. Simply a modern merchantman going peacefully about its business. Or so the slim boyish "George Browncoal agent" had hoped any dangerous adversary in the vicinity of the London docks would believe falsely. When he left the Thames on Sea King, he had staked his life, the life of a Confederate spy, on that risk. Any hostile interception, any "search and seizure" of that vessel and her stores, would have guaranteed his imprisonment, even death. But Sea King was gone now, reported lost, in reality sold to the Confederacy, renamed and reflagged. "George Brown" had, for the first eleven days, risked only his own life, but now there were others, a new crew, and soon he would be risking these men's lives as well. Any hostile interception of this once-peaceful vessel now would be an act of war. And war was his profession. He was in fact an experienced and dangerous warrior of the sea: Lt. William Conway Whittle, CSN. And this risk was only the first in a Homeric voyage that promised more, and ever more terrible, risks. What a busy day these twenty-four hours have been. Thank God we have a fine set of men and officers, and, although we have an immense deal to contend with, we are industrious and alive to the emergency. Just the sort of mild pleasantries (aside from that "emergency") one might expect from the mind of a slightly built twenty-four-year-old with naBaldwin, John is the author of 'Last Flag Down The Epic Journey of the Last Confederate Warship', published 2007 under ISBN 9780739327180 and ISBN 0739327186.