Kiss of the Highlander 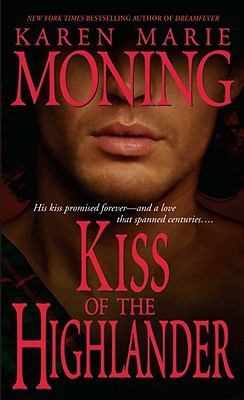 Highlands of Scotland September 19, Present Day Gwen Cassidy needed a man. Desperately. Failing that, she'd settle for a cigarette. God, I hate my life, she thought. I don't even know who I am anymore. Glancing around the crowded interior of the tour bus, Gwen took a deep breath and rubbed the nicotine patch under her arm. After this fiasco, she deserved a cigarette, didn't she? Except, even if she managed to escape the horrid bus and find a pack, she was afraid she might expire from nicotine overdose if she smoked one. The patch made her feel shaky and ill. Perhaps before quitting she should have waited until she'd found her cherry picker, she mused. It wasn't as if she was drawing them like flies to honey in her current mood. Her virginity was hardly presented in its best light when she kept snarling at every man she met. She leaned back against the cracked seat, wincing when the bus hit a pothole and caused the wiry coils of the seat to dig into her shoulder blade. Even the smooth, mysterious, slate-gray surface of Loch Ness beyond the rattling window that wouldn't stay closed when it rained ? and wouldn't stay open otherwise ? failed to intrigue her. ?Gwen, are you feeling all right? Bert Hardy asked kindly from across the aisle. Gwen peered at Bert through her Jennifer Aniston fringed bangs, expensively beveled to attract her own Brad Pitt. Right now, they simply tickled her nose and annoyed her. Bert had proudly informed her, when they'd begun the tour a week ago, that he was seventy-three and sex had never been better (this said while patting the hand of his newlywed, plump, and blushing bride, Beatrice). Gwen had smiled politely and congratulated them and, since that mild show of interest, had become the doting couple's favorite ?young American lassie.' ?I'm fine, Bert,? she assured him, wondering where he'd found the lemon polyester shirt and the golf-turf-green trousers that clashed painfully with his white leather dress shoes and tartan socks. Completing the rainbow ensemble, a red wool cardigan was neatly buttoned about his paunch. ?You don't look so well, there, dearie,? Beatrice fretted, adjusting a wide-brimmed straw hat atop her soft silvery-blue curls. ?A little green about the gills.' ?It's just the bumpy ride, Beatrice.' ?Well, we're nearly to the village, and you must have a bite to eat with us before we go sightseeing,? Bert said firmly. ?We can go see that house, you know, the one where that sorcerer Aleister Crowley used to live. They say it's haunted,? he confided, wiggling bushy white brows. Gwen nodded apathetically. She knew it was futile to protest, because although she suspected Beatrice might have taken pity on her, Bert was determined to ensure that she had ?fun.' It had taken her only a few days to figure out that she should never have embarked upon this ridiculous quest. But back home in Sante Fe, New Mexico, as she'd peered out the window of her cubicle at the Allstate Insurance Company, arguing with yet another injured insured who'd managed to amass an astounding $9,827 worth of chiropractic bills from an accident that had caused a mere $127 in damage to his rear bumper, the idea of being in Scotland ? or anywhere else, for that matter ? had been irresistible. So she'd let a travel agent convince her that a fourteen-day tour through the romantic Highlands and Lowlands of Scotland was just what she needed, at the bargain price of $999. The price was acceptable; the mere thought of doing something so impulsive was terrifying, and precisely what she needed to shake up her life. She should have known that fourteen days in Scotland for a thousand dollars had to be a senior citizens? bus tour. But she'd been so frantic to escape the drudgery and emptiness of her life that she'd only cursorily glanced through the itinerary and not given her possible traveling cMoning, Karen Marie is the author of 'Kiss of the Highlander' with ISBN 9780440236559 and ISBN 044023655X.