King of Cash The Inside Story of Laurence Tisch 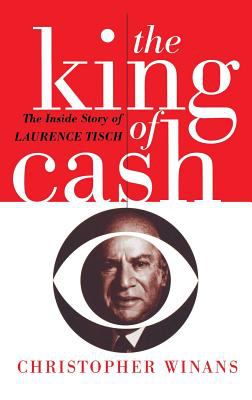 The king of cash The Inside Story of Laurence Tisch His net worth is more than $1 billion. His corporate assets total more than $40 billion and generate almost $14 billion in annual revenue. His thrift in the name of cash flow is legendary. He is often compared to Warren Buffett because of his knack for turning struggling companies into hugely profitable ones. He is Larry Tisch, Chairman of CBS. Written by a former Wall Street Journal editor, this book takes a candid look at the career of a man as admired as he was once despised. In this behind-the-scenes story, you'll come to know the unaffected family man whose best-known accomplishment is the transformation of CBS back to its glory days as the Tiffany Network. You'll find out what friends, family, colleagues, and detractors have to say about him. You'll see him in action as he out-negotiates rivals and protects himself and his stockholders even when situations turn sour. He is, as Christopher Winans describes him in this book, "unfettered by fear." A self-made man, Tisch transformed a modest family investment in Florida into the mega-empire Loews Corporation that owns, among other things, Bulova and the Lorillard Tobacco Company. In 1986, he staged a successful and closely watched coup of the CBS board, ousting its legendary chairman William Paley. Though he has often been derided for downgrading the fabled Tiffany network into more humble Kmart trappings, Tisch has been at the helm during CBS's elevation from the ratings cellar to become America's most watched network. He is the man who stole David Letterman from NBC. In this fascinating book, Winans explores Tisch's investment philosophies and business strategies over the course of his career. He assesses Tisch's options in light of recent developments, including the loss of eight prime affiliates to Fox, the foiled QVC merger, and rumors that CBS is on the auction block. You'll meet some of the players in Tisch's high-stakes games, including Barry Diller, Warren Buffett, Bruce Wasserstein, "60 Minutes" producer Don Hewitt, Martin Lipton, Fay Vincent, Gordon Getty, Arthur Liman, Howard Stringer, and dozens more. "I actually like him more now than I did then."-Andy Rooney, page 324 Tisch has always had much more fun making money than spending it. He has confessed, "I find business very relaxing." In The King of Cash, you'll get an honest account of the strengths and the flaws of this modern business marvel and get a firsthand peek at the challenges facing Tisch and CBS in the coming years. "You can learn much of value by studying the life of my friend, Larry Tisch. This book is the way to do it."-Warren E. Buffett, Chairman, Berkshire Hathaway Inc. "As president of a university whose trustees he chairs, I've seen Larry Tisch up close for over a decade. This fascinating book illuminates the life of a brilliant business leader and the most generous of philanthropists."-John Brademas, President Emeritus, New York University "Larry Tisch is one of the truly great investor-businessmen of our time. This book tells the story and is a great read."-Barton M. Biggs, Chairman, Morgan Stanley Asset Management Inc. "This book is all about a great success in contemporary business life in the best American tradition. It brings to the fore one man's determination and drive to seek exceptional business opportunities through insights, shrewdness and understanding of the ebbs and flows in business and finance while maintaining personal integrity and dedication to family."-Henry Kaufman, President, Henry Kaufman & Company, Inc.Winans, Christopher is the author of 'King of Cash The Inside Story of Laurence Tisch' with ISBN 9780471549239 and ISBN 0471549231.