Judy Moody, M.d. The Doctor Is In! 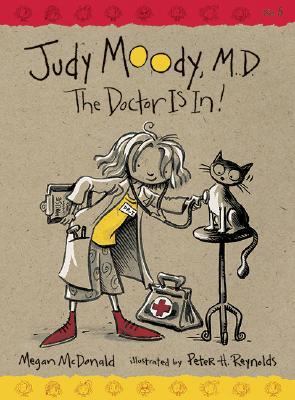 PLIP! Judy Moody woke up. Drip, drip, drip went rain on the roof. Blip, blip, blip went drops on the window. Not again! It had been raining for seven days straight. Bor-ing! She, Judy Moody, was sick and tired of rain. Judy put her head under the pillow. If only she was sick. Being sick was the greatest. You got to stay home and drink pop for breakfast and eat toast cut in special strips and watch TV in your room. You got to read Cherry Ames, Student Nurse, mysteries all day. And you got to eat yummy cherry cough drops. Hey! Maybe Cherry Ames was named after a cough drop! Judy took out her mom's old Cherry Ames book and popped a cough drop in her mouth anyway. "Get up, Lazybones!" said Stink, knocking on her door. "Can't," said Judy. "Too much rain." "What?" "Never mind. Just go to school without me." "Mom, Judy's skipping school!" Stink yelled. Mom came into Judy's room. "Judy, honey. What's wrong?" "I'm sick. Of rain," she whispered to Mouse. "Sick? What's wrong? What hurts?" asked Mom. "My head, for one thing. From all that noisy rain." "You have a headache?" "Yes. And a sore throat. And a fever. And a stiff neck." "That's from sleeping with the dictionary under your pillow," said Stink. "To ace your spelling test." "Is not." "Is too!" "See, look. My tongue's all red." Judy stuck out her Cherry-Ames-cough-drop tongue at Stink. Mom felt Judy's head. "You don't seem to have a fever." "Faker," said Stink. "Come back in five minutes," said Judy. "I'll have a fever by then." "Faker, faker, faker," said Stink. If only she had measles. Or chicken pox. Or . . . MUMPS! Mumps gave you a headache. Mumps gave you a stiff neck and a sore throat. Mumps made your cheeks stick out like Humpty Dumpty. Judy pushed the cough drop into her cheek and made it stick out, Humpty-Dumpty style. "Mumps!" said Dr. Judy. "I think I have the mumps! For real!" "Mumps!" said Stink. "No way. You got a shot for that. A no-mumps shot. We both did. Didn't we, Mom?" "Yes," said Mom. "Stink's right." "Maybe one mump got through." "Sounds like somebody doesn't want to go to school today," said Mom. "Can I? Can I stay home, Mom? I promise I'll be sick. All day." "Let's take your temperature," said Mom. She took the thermometer out of the case. "Cat hair?" said Mom. "Is this cat hair on the thermometer?" "She's always making Mouse stick out her tongue and taking the cat's temperature," said Stink. Mom shook her head and went to wash off the thermometer. When she came back, she took Judy's temperature. "It's 98.6," said Mom. "Normal!" "Faker, fakey, not-sick, big fat faker," said Stink. "At least my temperature's normal," said Judy. "Even if my brother isn't." "Better get dressed," said Mom. "Don't want to be late." "Stink? You're a rat fink. Stink Rat-Fink Moody. That's what I'll call you from now on." "Well, you'll have to call me it at school 'cause you don't get to stay home." Judy stuck out her cherry-red, no-mumps tongue at Stink. She was down in theMcDonald, Megan is the author of 'Judy Moody, M.d. The Doctor Is In!', published 2006 under ISBN 9780763626150 and ISBN 0763626155.